Accessible trail to be dedicated at Wells Harbor Park

The Wells Reserve and Town of Wells will dedicate the Webhannet Marsh Trail, the reserve’s first ADA-compliant trail, on April 19 at 2 p.m. at Harbor Park in Wells. The public is invited to the formal opening of the trail, which was completed last fall.

Two paths and one overlook comprise the quarter-mile trail system, which crosses a 25-acre parcel owned by the town and incorporated into the Wells National Estuarine Research Reserve through a conservation easement.

“The Webhannet Marsh Trail allows people with disabilities to approach the edge of a salt marsh and experience its unique sights, sounds, and smells,” said Paul Dest, executive director of the Wells Reserve. “This trail also gives the Wells Reserve an accessible venue for offering educational programs about estuaries.”

The landscape surrounding the trail includes grass, shrub, and wooded areas and a broad estuary where salt marsh grasses grow above twisting creek channels. Along the trail, interpretive signs explain salt marsh ecology and historical changes at the site.

An additional interpretive sign has been installed on the Wells Harbor dock, a short distance away from Harbor Park, to illustrate the Wells Reserve’s environmental and coastal monitoring activities in the Webhannet River and Little River estuaries.

Town Manager Jon Carter praised the new trail as the first completed section of a long-sought pedestrian way between the harbor and U.S. Route 1. “This is a safe, off-road walkway with a beautiful view,” Carter said.

The Webhannet Marsh Trail was designed by Wright-Pierce Engineering of Portland and constructed by Green Shadow Landscaping of Rollinsford, New Hampshire. Construction began in August 2018 and was completed in September.

The new trail is a partnership project involving the Wells Reserve, the Town of Wells, and the National Oceanic and Atmospheric Administration (NOAA). Funding was provided by NOAA through a grant to the Wells Reserve, with matching funds coming from the town. 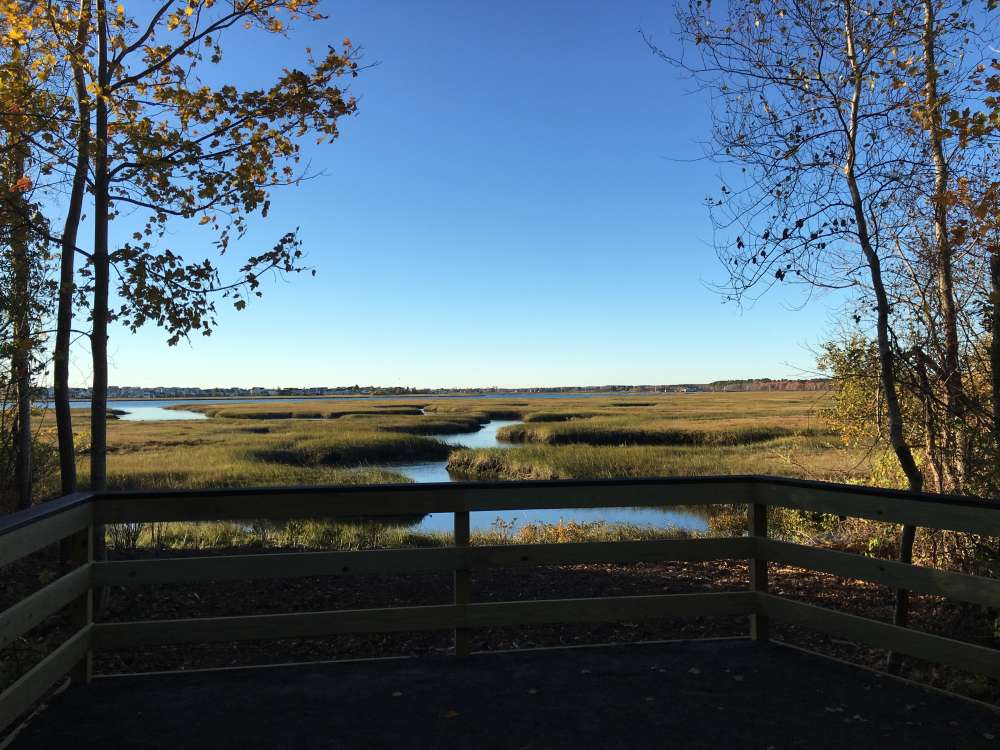 Those who've studied Laudholm history know that the current barns were built in the first decade of the twentieth century, after a 1902 fire burned the old barns to the ground. Some may recall that the fire "was started by burning, wind-blown shingles from a fire at the Goodwin farm a quarter mile away." *

A couple of years ago, Charles Lord became curious about where the Goodwin farm stood, so he asked his father's sister what she remembered. She pointed him "just up the road."