An uncommon sapling was hiding in plain site until one October morning when its leaves caught the right eyes. Blending in along the drainage ditch that defines the early Muskie Trail, the tree's changing leaves reached into the path of Eileen Willard and Ginger Laurits as they embarked on an early morning walk. Eileen stopped short. 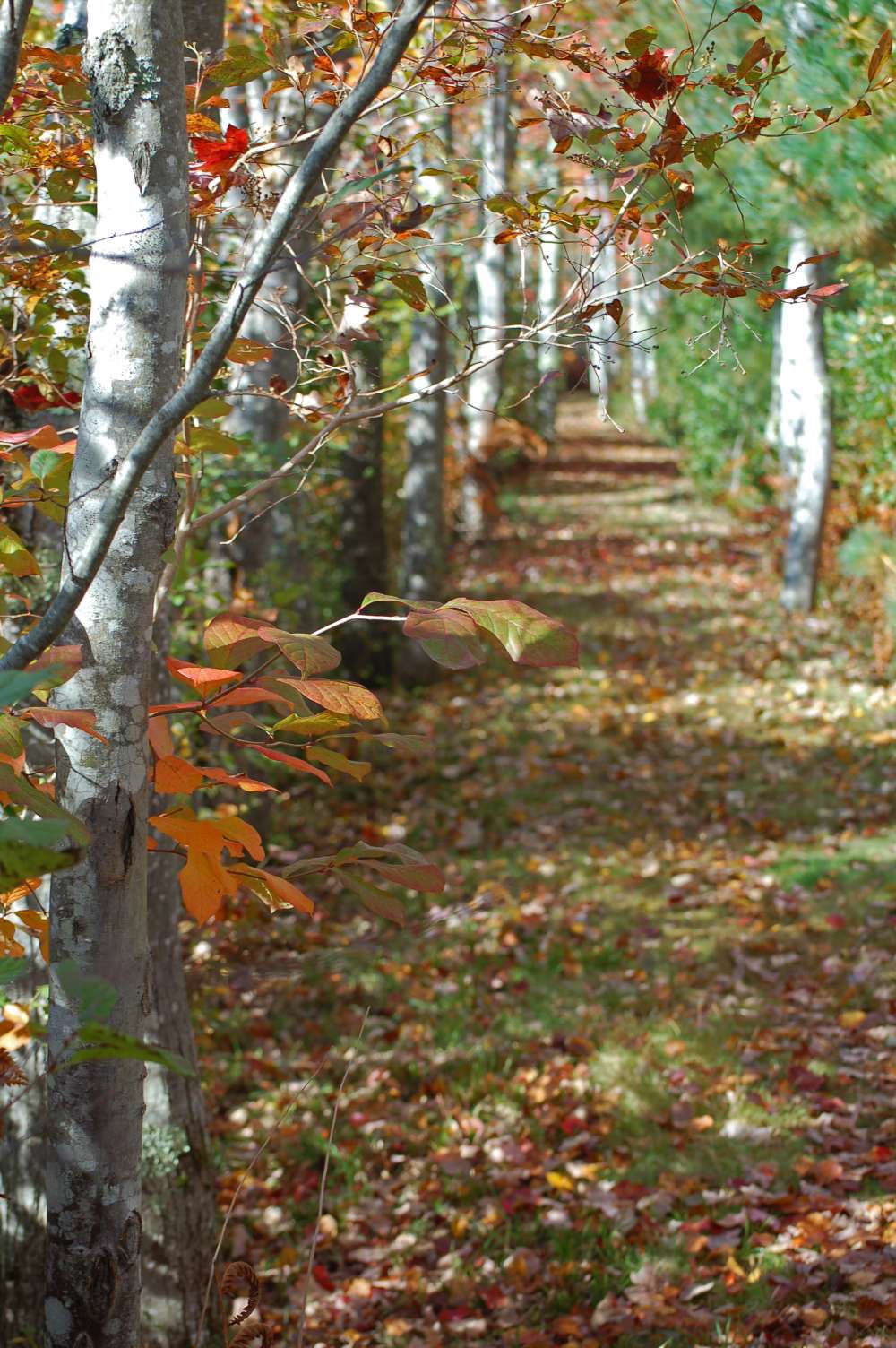 The glossy, smooth-edged, obovate leaves were tinged dark green, but dominated by a deep orange edging toward red. Their tips looked pinched into a point. They were different from any of the surrounding vegetation—and unlike any leaf Eileen had inspected during more than a decade sleuthing trees along all the trails of the reserve.

She recognized it as a black tupelo, Nyssa sylvatica, or blackgum tree. The tupelo is not uncommon in the region, but this specimen may be the first noted at the Wells Reserve. The species is not included in the reserve's Site Profile, the most comprehensive presentation of Wells Reserve ecological facts, and it has not been mentioned by any number of visiting naturalists. 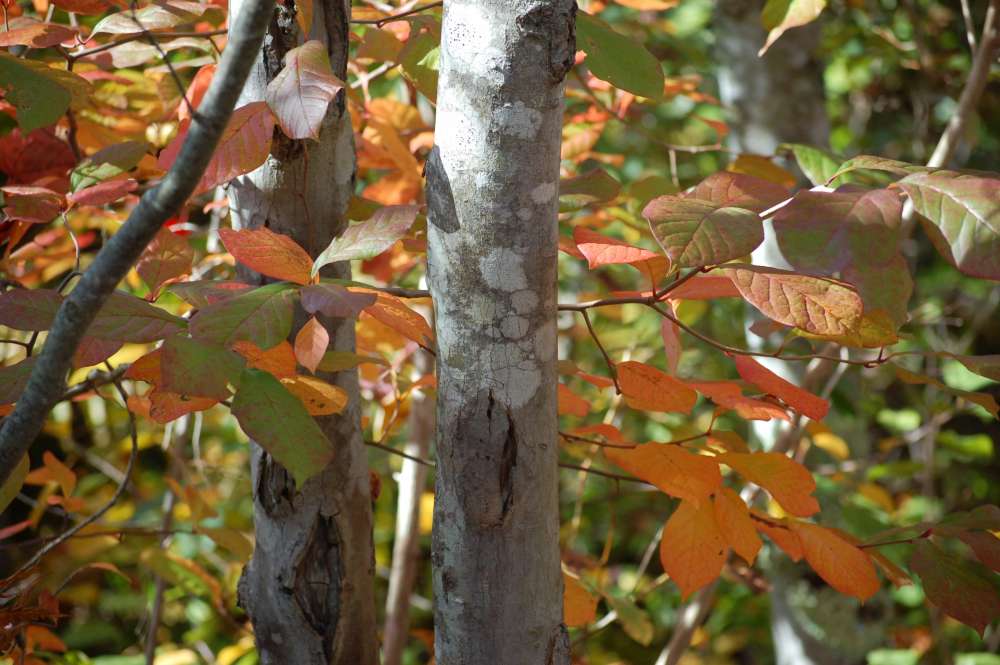 The deep orange leaves of this black tupelo reach past two red maple trunks. The tupelo stem is not obvious in this view.

Black tupelo favors very wet areas, according to Forest Trees of Maine, so its position above the spring-fed ditch is a decent fit for that expectation. Even at its young age (with a main stem only about 1 cm in diameter), the species' characteristic horizontal branching pattern is apparent.

This will be a fun tree to watch grow through the seasons and years. It has the potential to live for centuries. Epping, New Hampshire has a blackgum over 700 years old. Imagine. 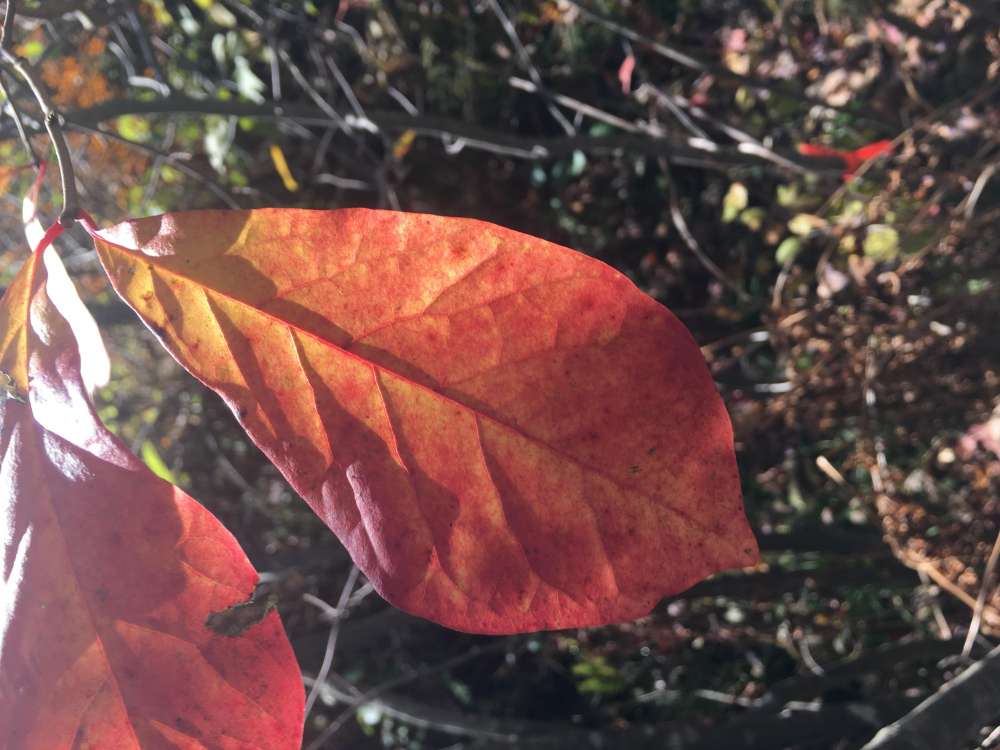 When they do, we hear about it, from a dedicated group of volunteers.

WELLS, Maine, July 25, 2012 — A 34-acre woodlot in Wells is seen as a testing ground for managing timber for long-term gain while maintaining its value for wildlife, clean water, and recreation. The Wells National Estuarine Research Reserve will complete a partial harvest of its Yankee Woodlot this fall while hosting a series of four workshops that will encourage participants to get involved in the process.

When the Walk Ends

The Farm in My Front Yard