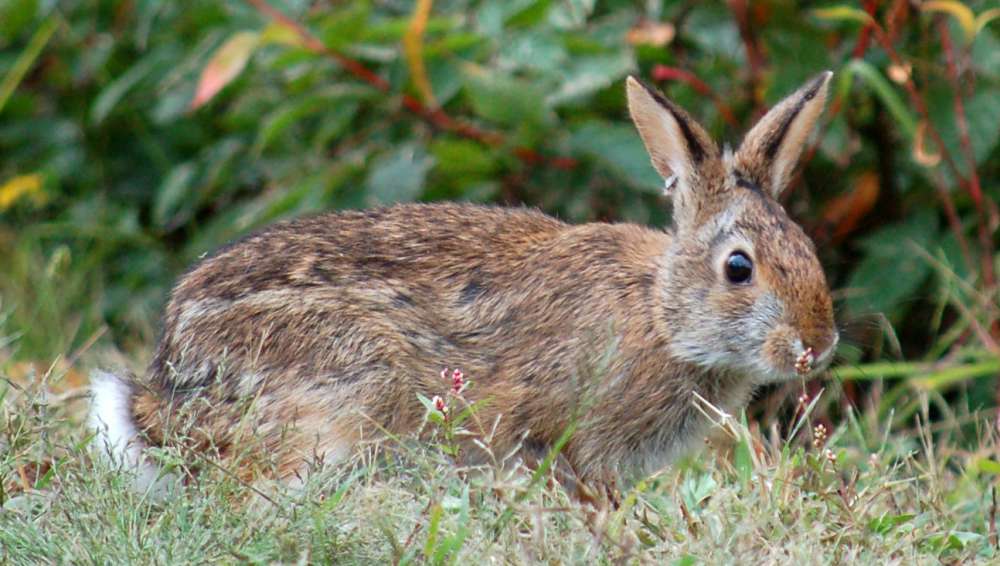 New England cottontail rabbit released at the Wells Reserve at Laudholm on September 30, 2021.

WELLS, Maine, October 5, 2021 — Four New England cottontail rabbits were brought to the Wells Reserve on September 30 as part of a long-term effort to rebuild local populations of this rare and endangered species. The bunnies were released by the Maine Department of Inland Fisheries and Wildlife (IF&W) into the thick, brushy habitat that suits them best.

The New England cottontail is a shrubland and young forest specialist that requires thickets to survive. "There are many predators on the landscape that all want to eat rabbits, so they need those thickets," said Cory Stearns, the IF&W wildlife biologist who coordinated the release.

The Wells Reserve features excellent New England cottontail habitat that is protected from future development, the agency said in a statement.

"For more than 15 years, we have been maintaining and creating new early-succession forest habitat to provide the right conditions for New England cottontails and other at-risk species," said the reserve's executive director, Paul Dest. "We believe great habitat diversity equals great wildlife diversity."

The day before the rabbits were released, the U.S. Fish and Wildlife Service proposed removing 23 species from protection under the Endangered Species Act, not due to recovery but to extinction.

“With climate change and natural area loss pushing more and more species to the brink, now is the time to lift up proactive, collaborative, and innovative efforts to save America's wildlife," said Interior Secretary Deb Haaland.

The Service opted against listing the New England cottontail under the Endangered Species Act, citing its own conservation work and positive efforts by its partners. In Maine, the Wells Reserve is central to two key activities, habitat management and reintroduction, that diminished the need for listing.

The New England cottontail is currently found in six towns in Maine: Cape Elizabeth, Scarborough, Wells, Eliot, York, and Kittery. The state population is estimated at less than 300 individuals and IF&W lists the species as endangered.

The released rabbits were raised in captivity specifically to be introduced into promising habitat. These four were born and raised at the Queens Zoo, Queens, New York, and the Roger Williams Park Zoo, Providence, Rhode Island.

More than 60 New England cottontails have been released at the Wells Reserve since the program began in 2017. The reserve was once a local stronghold, but the rabbit population declined until few or no rabbits remained. Concerted efforts to enhance rabbit habitat at the reserve have increased available thickets.

The reserve manages early-succession forest habitat for New England cottontails and other at-risk species. In 2017, the reserve began accepting captive-reared rabbits to revitalize the local subpopulation.

Trials and Triumphs: Conserving Painted Dogs in a Human-Dominated Landscape