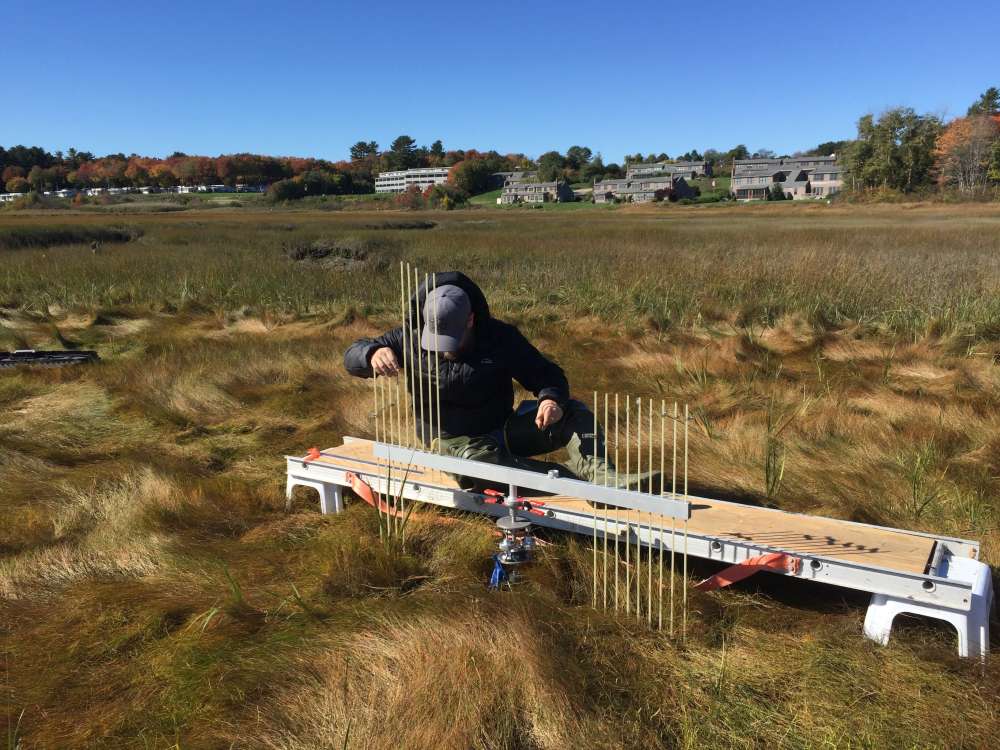 Once a year, a reserve scientist carries a balance beam, a quiver of fiberglass rods, and a special frame out to the salt marsh to make a precise series of measurements. Lately, it’s been Jacob Aman out there hauling the gear and collecting the data. He’s using what’s called a surface elevation table (SET).

The balance beam (really a hip-wide platform making a bridge between two low stools) keeps Jake from disturbing his study site, a preselected point in the salt marsh with a fixed post marking the spot. Years ago, that post was driven into the mud, through several meters of peat, and firmly against the bedrock below, establishing an immobile benchmark for future measurements. Jake mounts the SET frame, positions it just so, and begins sliding rods (pins) downward until they touch the marsh surface. He makes readings with millimeter precision.

The SET figures, combined with similarly robust monitoring of vegetation, nutrients, water quality, and weather, put research reserves on the map as vital sources of coastal data. With these ongoing programs, New England reserves can form the foundation for “Sentinel Site Cooperatives,” places where the National Oceanic and Atmospheric Administration focuses efforts to study and address the effects of sea-level change and salt marsh migration on coastal communities.

Consistent approaches to salt marsh surveys also means multiple reserves can more easily compare and pool their data. Recently, the New England reserves have been working toward synthesizing the many years of data obtained at all four sites. In October, Wells hosted a workshop to facilitate this effort. Dr. David Burdick, a long-time collaborator from the University of New Hampshire, is leading the project, which is funded by the NERRS Science Collaborative.

Analyzing massive data sets is a special challenge. What seem like little glitches in the data can cause big headaches for number crunchers. Special expertise and powerful programs are needed to support statistically strong claims. By merging data and talents, the New England research reserves are up to the challenge.

Meet the Scientists: Things That Go Beep in the Water

Lobsters and Climate Change in the Gulf of Maine