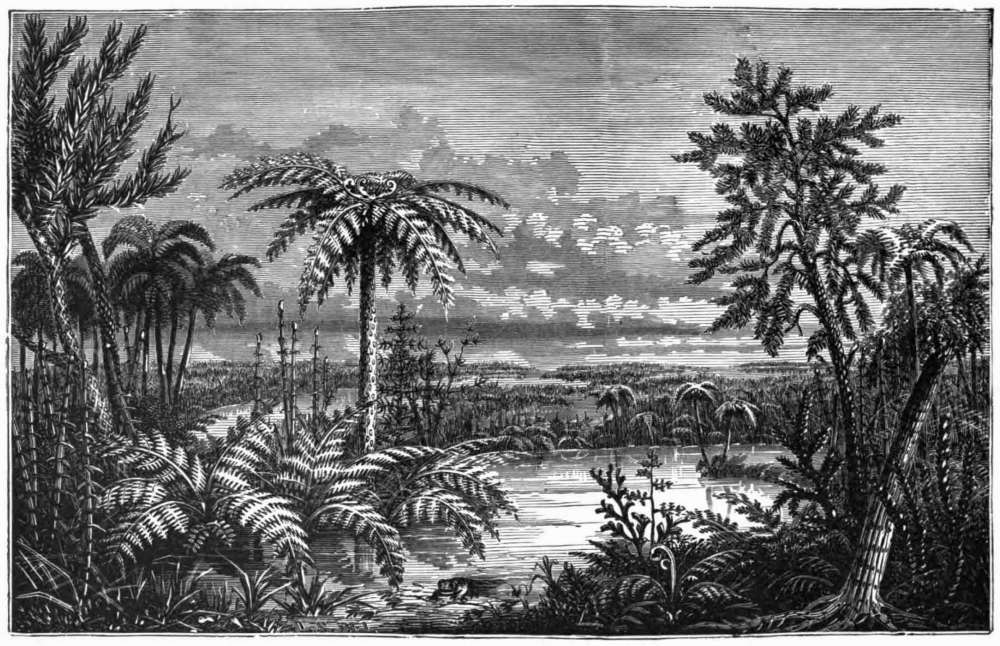 The following was published in the Biddeford-Saco Journal Tribune Sunday edition, 10/26/2014.

Three hundred and fifty million years ago, the supercontinent Pangaea floated where you sit today. It was a warm, wet world, bathed in oxygen and soupy seas. Just that geologic period’s name alone — Carboniferous, from the Latin for “coal bearing” — should be a clue that it was a time from which we get a lot of the fossil fuels we now use to power our society.

Back in that lush, swampy Carboniferous, gigantic plants used energy from the sun to take water and the carbon dioxide in the air to build themselves up. (Another product of that photosynthesis is the oxygen we still breathe today.) Ultimately, those plants died, were washed over, and buried. Deep underground, under tremendous heat and pressure, they transformed into oil and gas and coal. The energy they collected during their lives was locked away in their dark, rocky prisons.

But around 350 years ago, we humans started digging up and using those compressed plants, unlocking that fossilized fuel, and releasing millions of years of imprisoned Carboniferous energy back into the atmosphere in a considerably shorter time. Is it any surprise that 2014 may turn out to be the hottest year, worldwide, since official record-keeping began in 1880?

Since our society now burns rocks for energy, geology is a hot topic these days. As luck would have it, the Wells Reserve at Laudholm’s 2,250 acres of protected forest, field, and coastal marshland offer a great living laboratory to study geology and the carbon cycle. The physical processes active in the Carboniferous are still happening all around us.

A salt marsh, it turns out, is a fantastic “carbon sink.” That means it sucks up and stores carbon from the atmosphere. Just like a forest, our green coastal grasslands breathe in carbon dioxide, spew out oxygen, and use the carbon they keep to build themselves up. Unlike a forest, though, marshes are routinely flooded, which washes sand and clay over them and helps to bury some layers much quicker than that same process in a forest. As marshes change their elevation due to sea level rise or glacial rebound, their grasses die and get covered over with more sediment. Over thousands of years, that growing and dying and burying process forms peat: partially decayed vegetation and organic matter that piles up in layers tens of feet deep.

Storms and waves and human development can uncover and erode that peat, but if left alone for hundreds of millions of more years, that peat will be further buried, compressed, and heated. It will ultimately transform into, among other things, coal. That’s what happened to the marshes and swamps of the Carboniferous period — now they power our lightbulbs. (It takes about 700 pounds of coal to power a 100-watt bulb for a year.) If we’re still around and burning coal a few hundred million years from now (highly doubtful), some of that coal will have been born in the salt marshes and wetlands of our coastal regions.

But who has that long to wait? At the Wells Reserve, we want to know what the carbon capacity is of our marshes now. There’s an artful new scientific term for this idea: “blue carbon,” the proto-coal that’s stored in coastal and ocean vegetation. Mangroves, seagrasses and salt marsh grasses, it seems, sequester carbon far more effectively and more permanently than rainforests. According to the Blue Carbon Project, it may be that “carbon offsets based on the protection and restoration of coastal wetlands could be far more cost-effective than current approaches focused on trees.” And by saving salt marshes through a blue carbon approach, there could be enormous benefits to fisheries, tourism, and coastal communities as well.

With our partner Bates College, we’ll be hosting an international scientific workshop on blue carbon here at the Wells Reserve this December. We’re calling it “Blue is the New Green,” but all puns aside, I think we’re really doing it for the love of peat.

Nik Charov is president of Laudholm Trust, the nonprofit partner of the Wells National Estuarine Research Reserve in Wells, Maine. His Sunday column, “Between Two Worlds,” ventures forth from the intersection of art and science, past and future, metamorphic and sedimentary. More at wellsreserve.org/twoworlds.

What is "Blue Carbon"?

It sounds cool: Blue carbon. Have you heard of it? What does it make you think?