When green crabs arrived in New England more than 150 years ago, they found an unoccupied ecological niche in Maine’s salt marshes. Since then, the population has grown dramatically and its effects on natural systems have been strong and largely negative. Studies at the Wells Reserve and elsewhere have demonstrated that green crabs prey on softshell clams, damage eelgrass beds, and destabilize estuary creek banks.

Despite their long occupancy, great abundance, and serious impacts, there is a lot left to learn about green crabs. The reserve’s latest research has focused on understanding seasonal movements, population structure, sexual maturity, and effects on habitats.

The Webhannet River estuary is small, mostly linear, and has a launch ramp just 5 minutes from the Laudholm campus, making it a convenient site for studying crabs.

In a 2018 pilot study, researchers tagged male and female green crabs with acoustic “pingers” and tracked their movements. They found males moving up the estuary into generally warmer, shallower water while females tended to move down where water was colder. This finding appeared to be reinforced during trapping in 2019.

Researchers also looked for characteristics that would signal sexual maturity, finding females with carapace (shell) widths as small as 39 mm (a little over 1½ inches) carrying eggs. They learned that while female crabs with yellow, orange, or red undersides could be mature, eggs were seen most often on red-vented crabs. 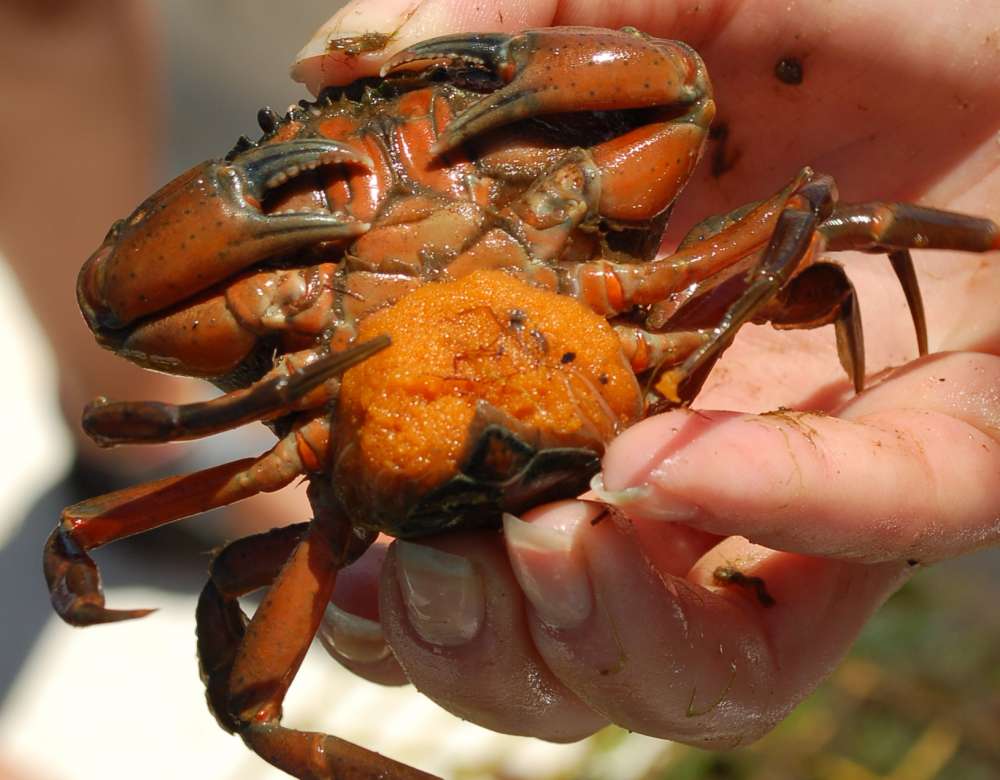 In 2018 and 2019, Wells researchers assessed environmental DNA (eDNA) as a monitoring tool for green crabs. They discovered that because hard-shelled crustaceans don’t release easily detectable amounts of eDNA, it can be difficult to trace them with this method. But in the lab, egg-bearing females did release measurable amounts, so eDNA still holds some promise for monitoring.

Green crabs were abundant in Maine, near absent in New Hampshire, and intermediate in southern New England. Crab effects were generally greater at southern sites, though, possibly because three resident crab species can have more of an impact than just one.

The scientists expressed concern that impacts on northern marshes may increase as additional species expand northward.

In a broad study of crab effects on salt marshes, completed in 2017–2018 and recently published in Ecology, scientists from 15 reserves found that while crabs can be damaging at a local scale, they do not appear to be a major threat to salt marshes at a broad scale.

Instead, salt marsh elevation raised greater concern. Low areas in a salt marsh are submerged more often and for longer periods, causing them to become less healthy and more susceptible to damage. The authors concluded that rising sea levels pose a larger threat to the nation’s salt marshes than do crabs.

Green crabs appear to have the potential to maintain their populations and continue spreading as an invasive species, even as southern Maine's coastal waters become warmer and more acidic.