Our homepage status bar was one of the niftier features built into this website when it launched in 2017. That snapshot of tide, weather, water, and sunset information has been serving both visitors and staff on a daily basis for nearly 2 years. So it was disturbing to discover, back in mid April, blank space where air temperature, wind speed, and water temperature data should have been.

I could see the missing numbers had one thing in common: Thanks to a slick bit of website coding, they all come from the NOAA CO-OPS station at Wells Harbor. A quick look at "our" Tides and Currents station home page let me know the glitch was not just our problem. This was a nationwide hiccup.

Notice: We are experiencing a wide spread communication outage affecting the availability of water level and meteorological data for some of our stations, as well as several critical bridge clearance measurements. We are diligently working to resolve this data outage.

With a mix of relief and concern, I checked with our resident tech wiz. Jeremy was a step ahead of me:

There has been a "rollover event" (think Y2K) with the GOES satellite system and hundreds (if not thousands) of users are now unable to transmit data, as their transmitters think it's 1969 and cannot perform a GPS sync with the satellites. This is the reason we are missing our data up on the Wells Reserve homepage, which is harvested from the Wells tide gauge / MET station. Hopefully numbers will simply "magically reappear" in a few days.

To slide into the technical side for just a moment, this issue was all about something called a GPS Week Number. The Global Positioning System was designed with a 10-bit "week number" as part of its method for indicating exactly when a transmission occurs. Ten bits is only long enough to represent up to 1024 weeks, so every almost-20-years the week number "rolls over" to zero. The second Week Number Rollover event in GPS history happened on April 6.

The weather and water monitoring instruments kept taking their readings and feeding them to the computer, but because the radio now had an inaccurate clock the satellite would not accept the transmissions. On April 17, the NOAA Continuous Operational Real-time Monitoring Service (CORMS) turned off the Wells station's data stream. Our status bar lost three key readings.

New Radio to the Rescue

Unfortunately, the elderly transmitter at the harbor could not simply get a software update; the radio—not a small-ticket item—was now obsolete.

Fortunately, Jeremy managed to convince NOAA to send us a replacement. After a few weather and minor technical delays, he finished installing it this morning. When CORMS saw good data coming through, they restarted the service at 11:20. Our display was back online, just in time for Memorial Day weekend. 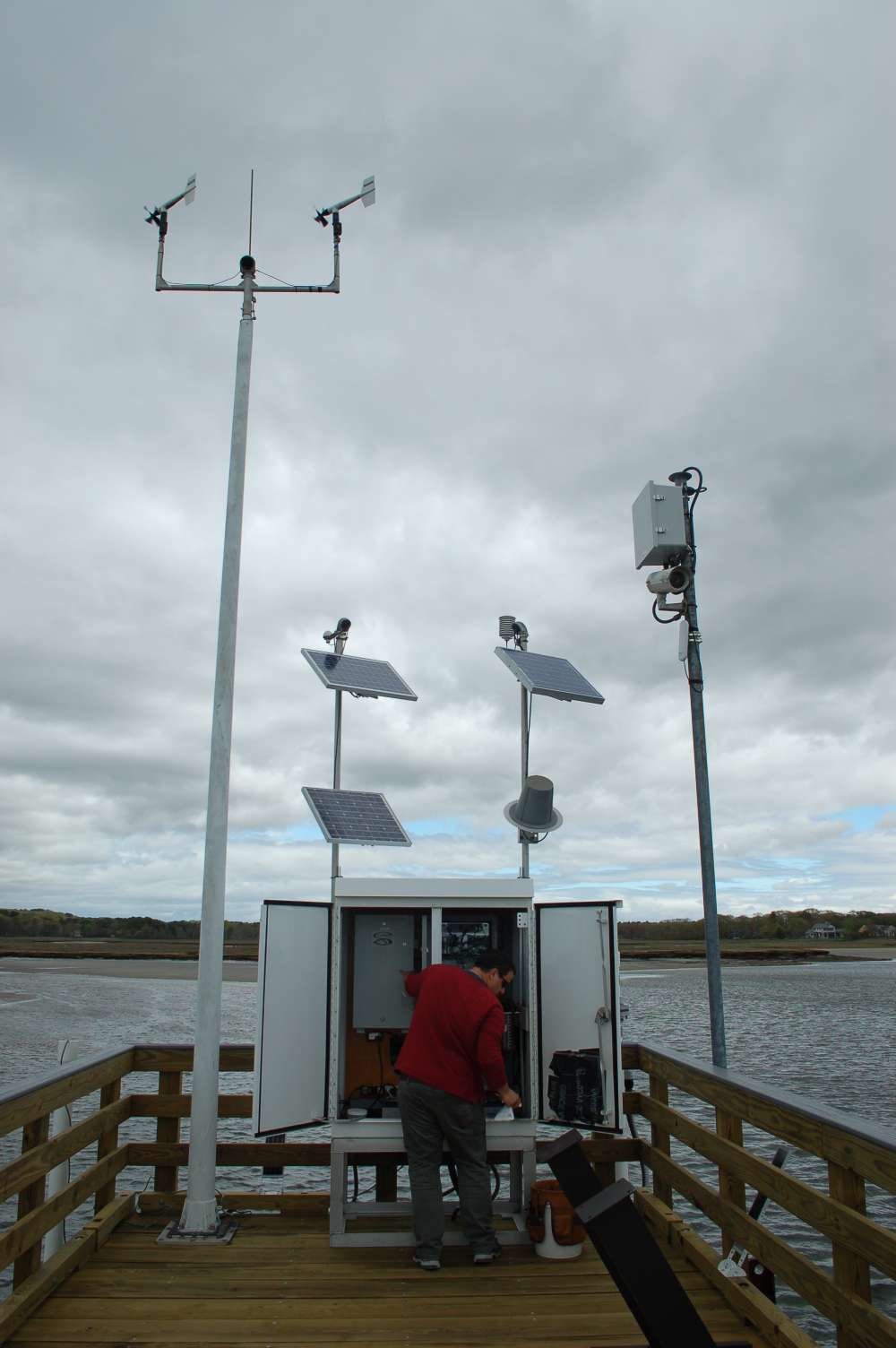 May’s flooding washed away two of the Reserve’s water data-logger units used for the System-Wide Monitoring Program (SWMP). Replacing the units was well timed, though, as equipment upgrades now allow public access to “real-time” data on weather and water quality.

Whew! Nothing like some February rain showers huh? It's been a "weird" winter for lack of a more "technical" term.....

Here are some numbers from the most recent "Blast" that occured Thursday Feb 25 through early morning of February 26th 2010. (All data was collected on the SWMP Meteorological Station behind the Maine Coastal Ecology Center.)