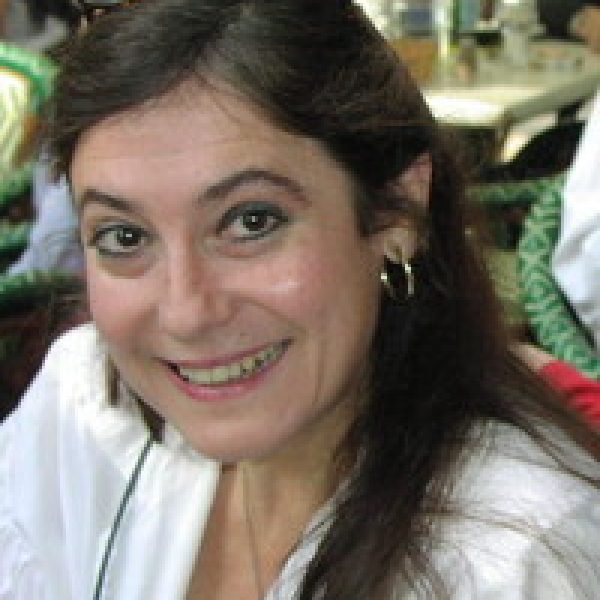 Quietly effervescent with a deep love for Laudholm, Rhoda Frederick has played many key roles here. Not only has she been a beloved volunteer for many, many years, giving generously of her time in all sorts of capacities, but she has been a faithful member from the very beginning.

Back in the early ‘80s, Rhoda was teaching second grade in Wells when she came upon Mort Mather at a table outside one of the area stores. Already acquainted with Mort as he was father to Josh and Cait, two of her students, she learned he was recruiting people to join the fight to save this beautiful 17th Century farm from developers eager to drain the marshlands and turn the glorious seaside property into a swath of high-end condos. Rhoda was intrigued and made a donation to Laudholm then and there. 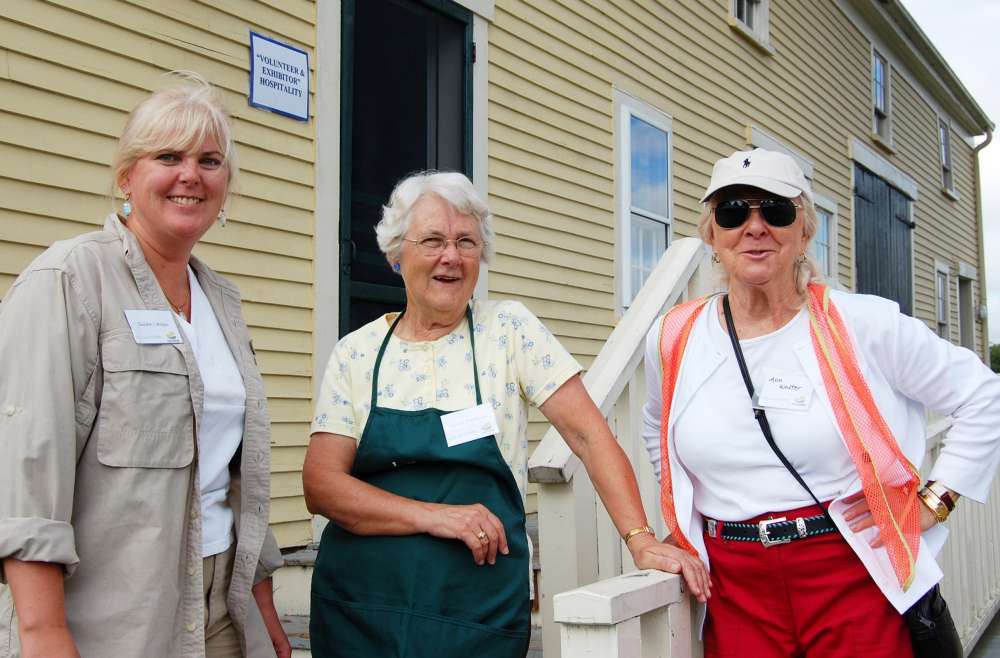 Always by the Sea

Growing up in Belfast, Maine, Rhoda had always loved the sea. She helped earn her UMaine tuition by working several summer jobs including serving ice cream at the Searsport Dairy Queen and selling candy at the counter of the 5&10 in Belfast (where on one memorable occasion, she cringes to remember, she let a whole barrelful of malted milk balls clatter across the floor).

She met her husband, Eugene, at college in Orono and after receiving their degrees, they spent their first 15 married years raising three children in Beverly, Massachusetts, also by the sea. Always ready for adventure—even on a budget and sometimes with a child still in the crib—the family often spent glorious action-packed weekends and vacations camping. By a river or in state parks, they delighted in hiking, swimming, sleeping in tents, and cooking their food over a campfire.

In 1972, they decided to move back to Maine and settled in Kennebunk. With her college degrees in home economics and science, Rhoda became first a full-time teacher’s aide then a teacher herself. It was while teaching at Wells Elementary School that she became fast friends with another second grade teacher, Alice Strait.

In 1988, when Mort Mather charmed Alice into organizing a crafts festival fundraiser at Laudholm, Rhoda was one of the first people Alice asked to help. One of Rhoda's jobs was to walk around with a clipboard on the day of the festival asking people how they found out about the event. She was also in charge of the drinks—healthy fruit juices and water. She remembers the two great draft horses (Bill and Bob), who stabled down the road in the Alheim barn, giving wagon rides. And she remembers her husband Gene helping to park cars. At the end of the day, the volunteers who had worked to make it all happen gathered to celebrate what they’d accomplished with a glass of wine as they waited in high anticipation to hear the tally from the money room. "It was all gravy. All money for Laudholm."

With a love of learning in her bones, and being a member of the Wells Reserve Education Committee from its inception, Rhoda helped pilot the reserve's award-winning DEPTHS program. She would take groups of 10 kids on explorations of the estuary, uplands, forest, and beach where they did things like salinity testing, identifying birds, and tracking animals. As Rhoda says, “we have the whole world right here.”

Having always lived near the sea herself, Rhoda was amazed at the kids from a few miles inland who had never been to the beach or even seen the ocean. After retiring from teaching, she became a Wells Reserve docent and led groups of 4th graders from area schools all over the Reserve. She loved learning all she had to learn to become a docent.

Pressed to choose a favorite place, Rhoda says she can never get enough of the walk to the barrier beach and that the barn will always have a special place in her heart. 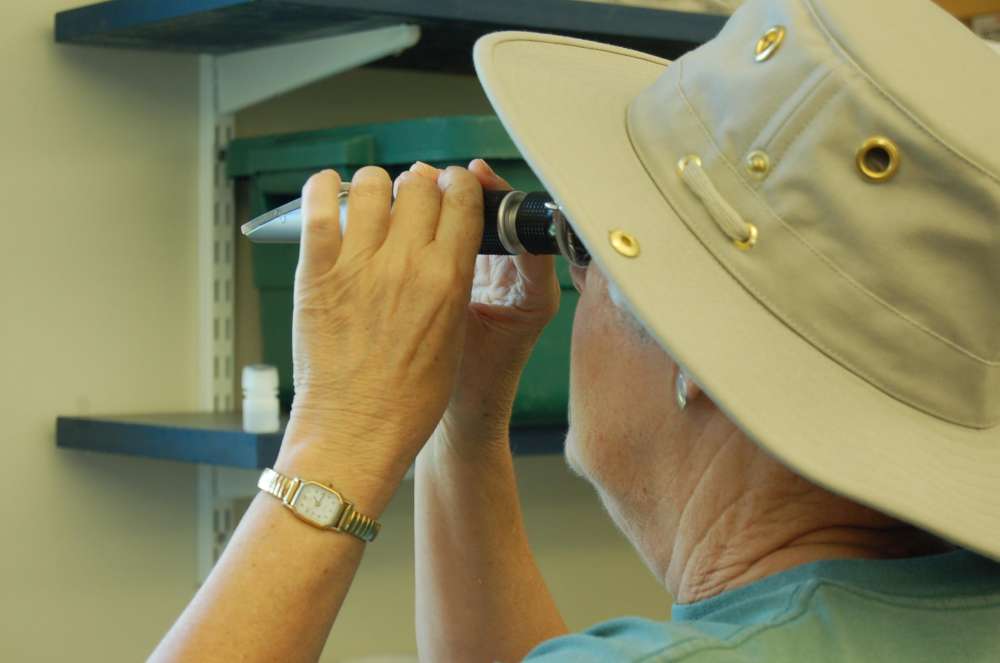 Rhoda Frederick uses a refractometer to measure water salinity as part of her training in the Wells Reserve docent program.

Rhoda and Eugene kept on volunteering over many years, Rhoda with events and education while Gene became a vital member of the maintenance volunteers. The couple both helped put on the annual Bean Supper and Barn Dance, a festive Laudholm fundraising effort of the early years.

After Eugene died in 2004, Rhoda continued to spend winters in Zephyrhills, Florida, valuing the friendship they had developed with another couple there. When the wife died in 2012, Rhoda continued her good friendship with Wayne. Every spring Rhoda returns to Maine and to Laudholm, where she was delighted to memorialize her beloved husband through the Eugene Frederick Artway (the hallway to the auditorium).

As supportive as ever, with that love of adventure still in her soul, Rhoda Frederick is humble about her achievements. We who know her even a little know she is one of Laudholm’s rare treasures—a pearl beyond price. Thank you, Rhoda, for all that you’ve been and for all that you continue to be.

All volunteers are honestly appreciated, but some merit special attention for their unusual dedication. Each year, Laudholm Trust and Wells Reserve staff nominate certain volunteers for recognition. Here is our history of selections.

Interpretation is the Secret Sauce

Be the Spark! Become a Volunteer Docent