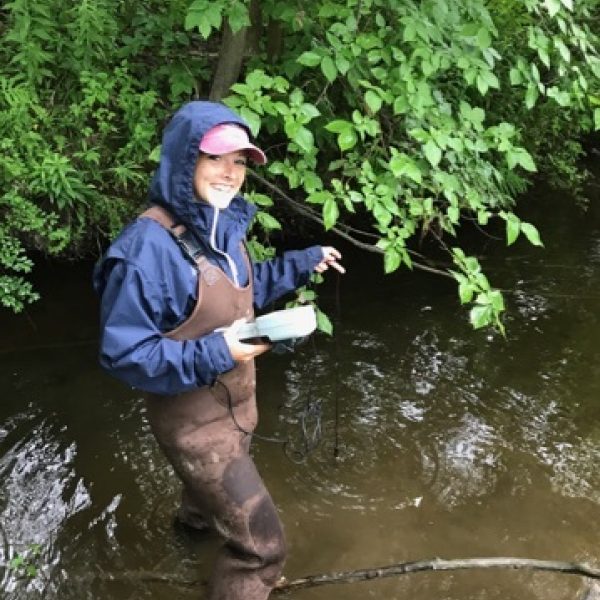 This summer, I studied potential sources of bacterial contamination in the Kennebunk River, a valued resource that supports fishing, swimming, boating, and tourism. Since 2009, water quality data has been collected throughout the river. Optical brighteners, a whitening agent found in detergents, have also been monitored as a source-tracking tool to pinpoint malfunctions in septic systems.

Water quality monitoring has demonstrated that the river exceeds the bacterial contamination standard for human safety as determined by the Maine Department of Environmental Protection (Maine DEP). Identifying potential pollution sources is the first step in lessening the risk of bacteria in the watershed.

My research, partnered with Maine’s river monitoring program, analyzed bacteria levels at six sites along the river. With the data from the Maine DEP, I ran statistical tests to relate bacteria levels to rainfall prior to sampling, optical brighteners, dissolved oxygen, and specific conductance.

The tests showed that rainfall 24 hours prior to sample collection had the greatest influence on the rise in bacterial contamination. Reviewing aerial photography of the sample sites on Google Earth supported the idea that residential, open areas were more affected by increased rainfall than were forested areas.

Because residential sites have greater amounts of paved surface, stormwater runoff from roads and other developed areas may be a leading source of bacterial contamination in the river.

During my internship, I learned about data analysis and how such research is of interdisciplinary importance. I worked with multiple volunteers and updated the bi-annual “MKRA Water Quality Assessment” report for project partners and stakeholders. I plan to apply to graduate school for my Master’s in Business Administration and hope to tie business and scientific research together.

Brianna DeGone is a biological engineering major at the University of Maine, where she is a member of the Women’s Track & Field team. She was a Hollings Scholar at the Wells Reserve in 2017.

Water Quality Monitoring in the Mousam and Kennebunk Rivers

Volunteers measure river conditions at 20 monitoring sites as part of a statewide program.

Water Quality Monitoring in the Mousam and Kennebunk Rivers

Lifting the LID for Storm Water

Why Did the Fish Cross the Road?