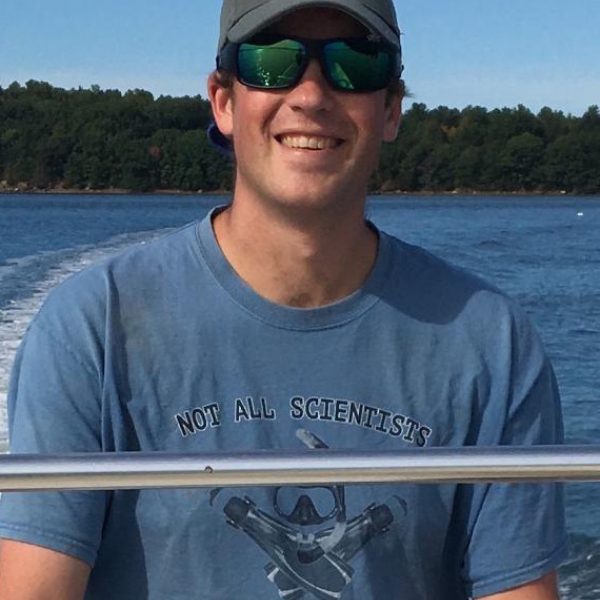 About seven years before the lobster landed on your dinner plate, it landed somewhere on the sea floor. Baby lobsters (often called the young-of-year or YoY in fisheries lingo) settle into the bottom-dwelling lifestyle we are more familiar with only after spending about a month growing and developing as planktonic larvae. Because they’re so small and inhabit a vast volume of ocean, relatively little is known about the habits of larval lobsters in the wild, yet this is one of the most important and vulnerable stages of their lifecycle for ensuring that lobster populations (and the fishery which relies upon them) are sustainable.

One of our current research projects here at the Wells Reserve involves studying the swimming abilities of postlarval lobsters. This is the final developmental stage prior to settling onto the seafloor where they will spend the rest of their lives. Working in concert with currents, larvae must swim from the offshore areas where they initially hatch and develop to coastal nursery habitats. During this phase, the larvae can be found swimming near the surface of the water and making periodic excursions (known as “sounding”) to the bottom to see if it is a good habitat for settlement. Postlarvae swim with their claws stretched in front of them like Superman flying—hence the nickname “superlobster” for this stage of development!

All this swimming is likely to be very energy-intensive, and as invertebrates, lobster metabolic rates increase with warmer temperatures. As climate change brings warmer water temperatures, larvae may burn through their energy reserves sooner. If they do, they may be less able to swim towards favorable settlement habitats closer to shore.

We are investigating how long larval lobsters are capable of swimming at different temperatures in the lab, and how much energy larvae have left over after swimming for several days. We are using specialized circular tanks called kreisels so larvae won’t get stuck in corners during experiments. We pump water through at a controlled rate, so we don’t overpower the swimming abilities of the little lobsters—it’s something like an exercise wheel for baby lobsters.

After the lobsters have been swimming for four days, a colleague measures the amount of lipids and proteins present in the larvae, which we can compare to the levels present in larvae who did not have to swim, as well as larvae we catch in the wild. What we learn will help us understand the ability of lobster larvae to reach their preferred settlement habitats, and thus improve our understanding of how the lobster population might respond to our changing climate.

The Wells Reserve will receive about $250,000 over 2 years to study how warming coastal waters are affecting lobsters in the Gulf of Maine, as part of Sea Grant's American Lobster Initiative.

Estuaries give us many reasons to be grateful, but high on our list this year is their importance to one particular Maine icon: the American Lobster (Homarus americanus).