To Mow or Not to Mow

Fields surrounding the Laudholm campus have been essentially free of trees for centuries. “Upland meddow” is how Henry Boade described his property in 1655 when selling it to land speculators. From then on, whether owned by Symonds or Clark or Lord, planted with potatoes or corn, or grazed by sheep and cows, the fields remained expansive open space.

Haying persisted into the 1980s, but agricultural use of the fields became history when the reserve was created and priorities shifted to habitat management. Harvesting, tilling, and pasturing made way to prescribed burns, brush hogs, and mowers as ways to keep fields open. These techniques benefit grassland-nesting birds like bobolink and meadowlark, native bunchgrasses and wildflowers, and other plants and animals that depend on fields to survive. 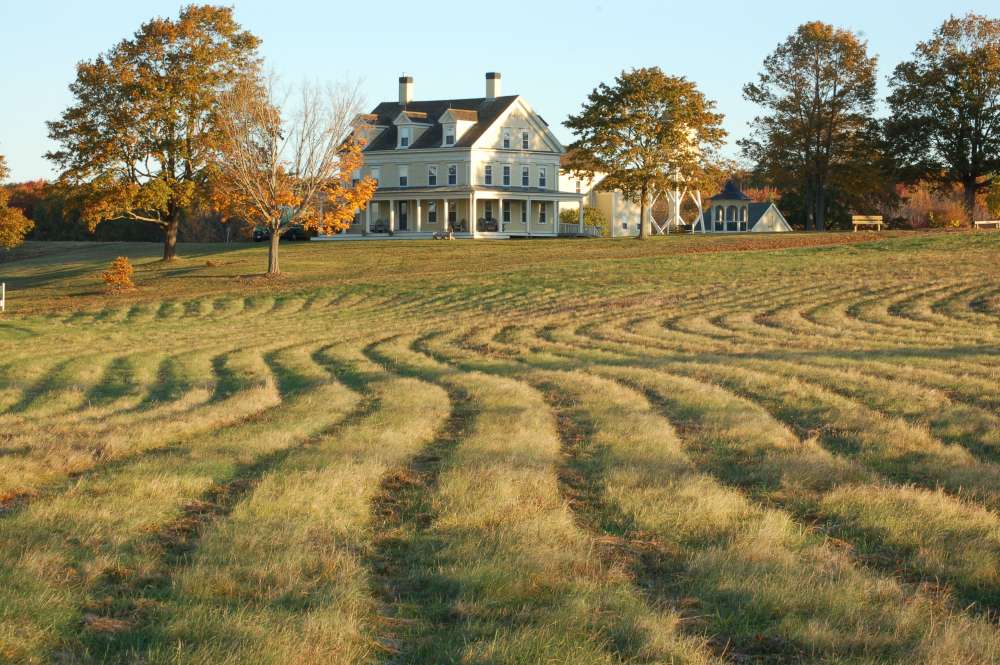 Periodic controlled burns are an excellent tool for strengthening grasslands and encouraging native species, but conditions need to be just right to permit them. Fire crews burned reserve fields in the 1990s, in 2009, and in 2013, but not since. For consistent, predictable management, mowing is more practical.

Late-summer cuts have allowed us to park hundreds of cars in two fields every September, when volunteers and attendees come in droves for two big festivals. Under guidelines set by our stewardship advisors, we have waited until after August 15 to prevent harm to bobolinks.

This year, in late August, we brought in a professional outfit to knock back growth across a wide area bisected by the Knight Trail. The effort was successful, but raised concern for monarchs that had been abundant in the fields this summer.

Unfortunately, fields with the highest density of invasive shrubs also have the most milkweed. Despite the ninth annual monarch rescue, during which staff and volunteers relocated monarch eggs and larvae ahead of mowing days, some caterpillars and chrysalises surely succumbed to machinery.

At the October stewardship meeting, Paul Dest said, “If we don’t mow regularly, our ‘big three’ invasive species—honeysuckle, barberry, and bittersweet—come back aggressively.” Alternating years may be sufficient in some areas, he added, but annual cutting is most effective. Ideally, according to the committee, new shrub growth gets cut early enough to prevent the energy produced by leaves from reaching root systems. 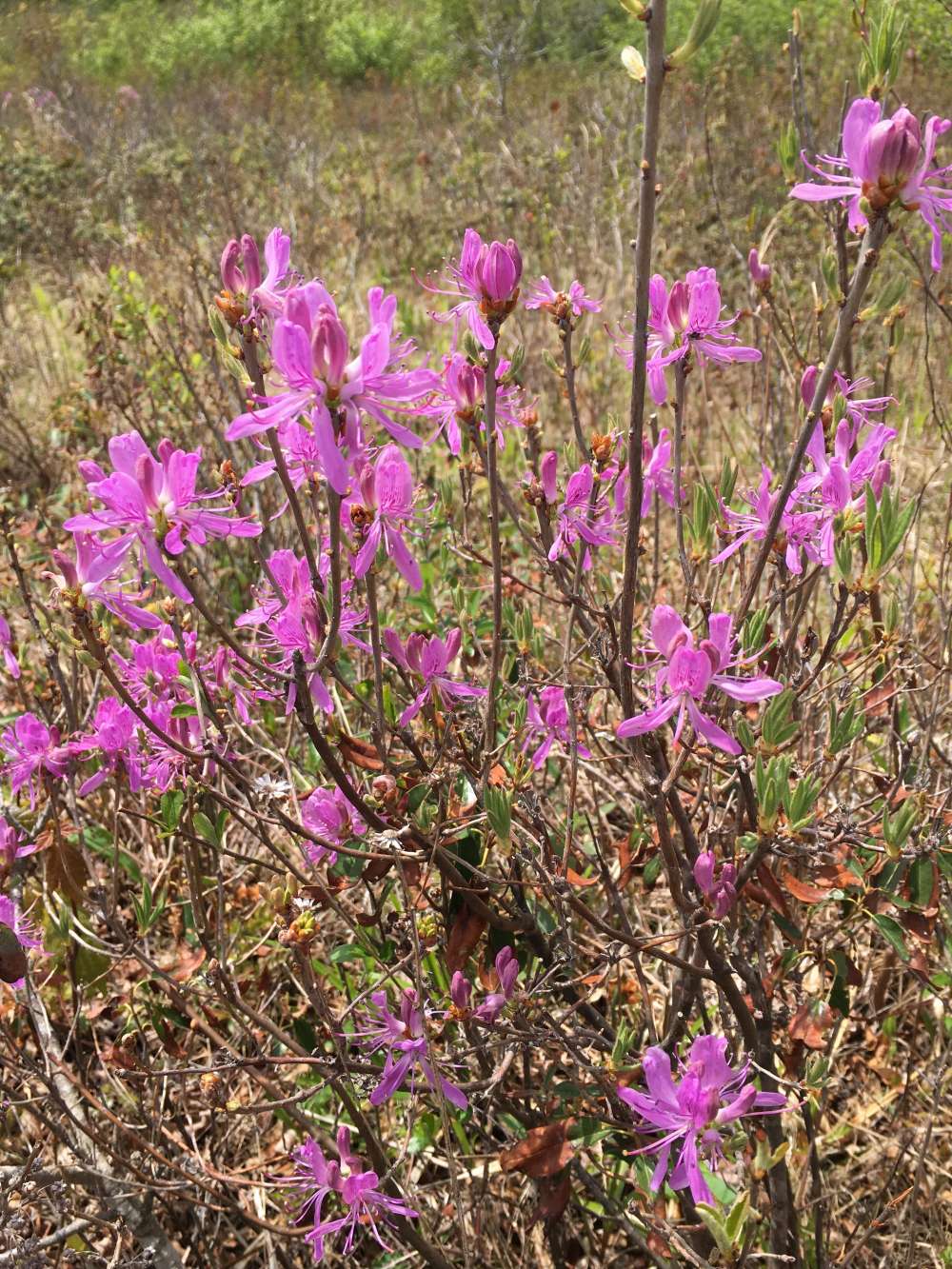 Rhodora in bloom in the so-called mossy bog.

Included in the 2019 cut was a 4-acre corner of a field along the Muskie Trail that holds a wetland habitat found nowhere else on the reserve. It is a place of cranberry and cotton-grass, rhodora and reed-grass, snakemouth and sundew. It’s an enigmatic wet meadow with bog affinities, but with soils more mineral than organic it skirts the labels of the Maine Natural Areas Program “community types.” For convenience, and despite the possible misnomer, we often call it the mossy bog.

This wet meadow has been a no-mow zone for a decade, with the best intentions but to its possible detriment. Mowing stopped when it became apparent the equipment was creating tracks in the substrate and disturbing sensitive plants. Cessation led to succession; without regular cutting, alder, willow, maple, pine, and beach rose encroached on the area. This threat was anticipated in the reserve’s 2013 Integrated Resource Management Plan, which warned “succession to shrubs under a no-mow regime could result in the loss of the rare plants at this site and other plants not present elsewhere on Wells Reserve.”

Pat Smith, a botanist with an orchid predilection, has known the mossy bog since the early days. Drawn here by the flowers, Pat soon dedicated herself to making paintings and pen-and-ink illustrations for our publications. Many early newsletters and education materials feature her renditions of plants, animals, structures, and people, frequently signed with a script A for Annaclette, her artist name.

After a lengthy hiatus, Pat came back to the mossy bog. For the past 2 years, she has been covering a portion of Maine in the US EPA’s Northeastern Coastal Zone for the North American Orchid Conservation Center. As a NAOCC volunteer, Pat requested permission from Stewardship Coordinator Sue Bickford to collect orchid materials from the Wells Reserve.

As she reacquainted herself with the habitat, Pat counted the orchids and made a list of the other plants she encountered. It’s literal ground work, so among her “tools of the trade” were a gardener’s stool for kneeling down and a walking stick for standing back up.

While going about her surveys, Pat found the soil less saturated than expected. She also noticed woody plants moving into formerly open habitat. Putting the two together, she surmised that the shrubs might be absorbing enough groundwater to change the meadow’s special character. She alerted Sue, who prescribed mowing at the next opportunity. 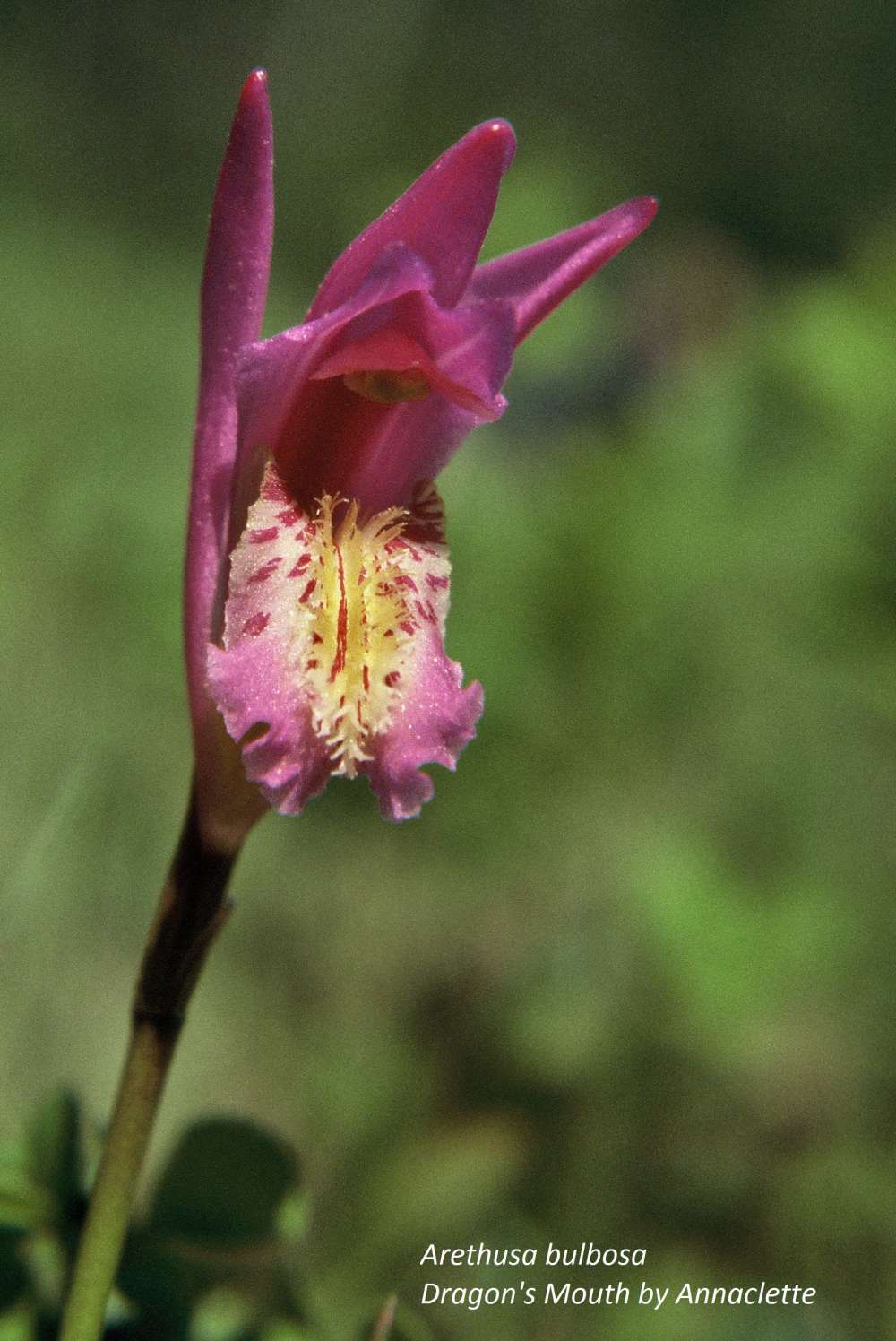 Like orchids everywhere, each of Maine’s 48 species depends on a fungus. “Orchid seeds are like dust,” Pat explained. “They have almost no food in them. So the plants get nutrients from a fungus that grows in their root system.” This mycorrhiza (mushroom/root) association is essential to orchid life, and is one reason that orchids are among the first plants to disappear when an ecosystem becomes degraded.

“NAOCC needs three pieces from each plant,” Pat said. “Root, leaf, and seed.” The project also requires Pat to complete special forms and make well-timed trips to the post office. She quipped the paperwork takes longer than the collecting.

A root clipping goes to the Orchid Recovery Program at Illinois College, which cultures its mycorrhizal fungus. Half a leaf heads to the Smithsonian Environmental Research Center, one of the NAOCC lead organizations, for DNA analysis. And seed pods (the individual seeds being too tiny) go to the Native Plant Trust, formerly New England Wild Flower Society, where they will be stored in perpetuity.

The horticultural trifecta feeds NAOCC’s effort to ensure the survival of native orchids across the United States and Canada. Pat’s grass pink snippets were successful in 2018 and have been added to the North American databank. Her dragon’s mouth did not succeed, so she collected again this year. Rose pogonia is in progress.

Ironically, one of the reasons we stopped mowing a decade ago might have been poorly founded, at least for orchids. “They like the soil to be saturated below the surface,” Pat said, “but the plants grow up on little hummocks above the moisture.” Were those mower tracks actually enhancing conditions for orchid growth? 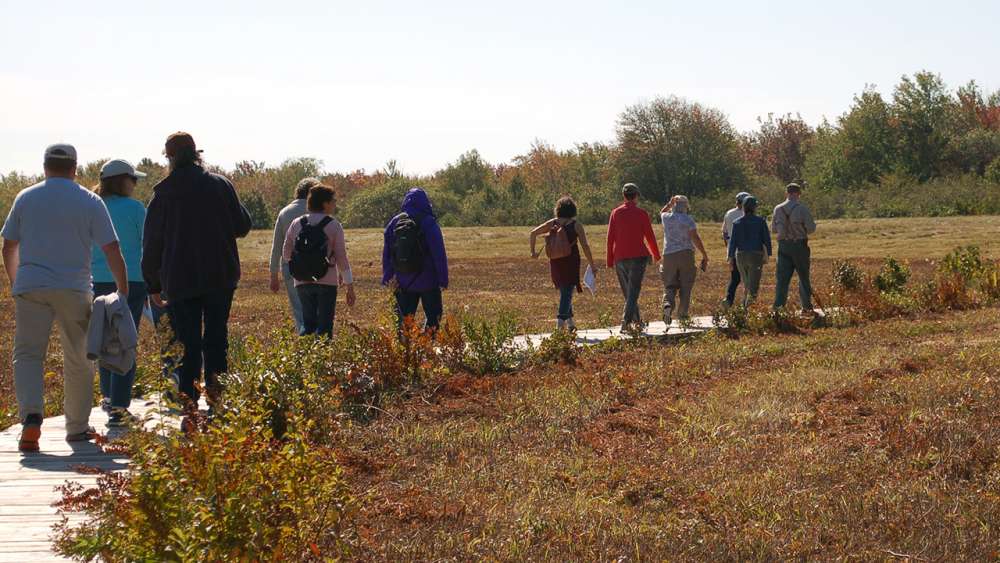 Dragon's Mouth in the Bog

Dragon's mouth is a perennial herb in the orchid family that blooms in the bog along the Muskie Trail.

A Botanist's Perception of Time

A botanist’s perception of time is measured by the coming and going of flowers. We can’t stop it, but we have the ability to rewind it.