August brings hundreds of herons and egrets to the salt marshes of southern Maine, post-breeding adults and young-of-the-year fueling up before migration at season's end. Bird photographers take advantage, aiming long lenses at the photogenic flocks.

Not everyone watching waders through a telephoto is a keen birder; one can always marvel without labeling. But the urge to share, together with a helpful community of fellow photographers online, usually results in an identification.

On Wednesday afternoon, Alexsandra Jean posted this picture to the MAINE Birds Facebook group with a simple comment: "Busy day at the marsh." 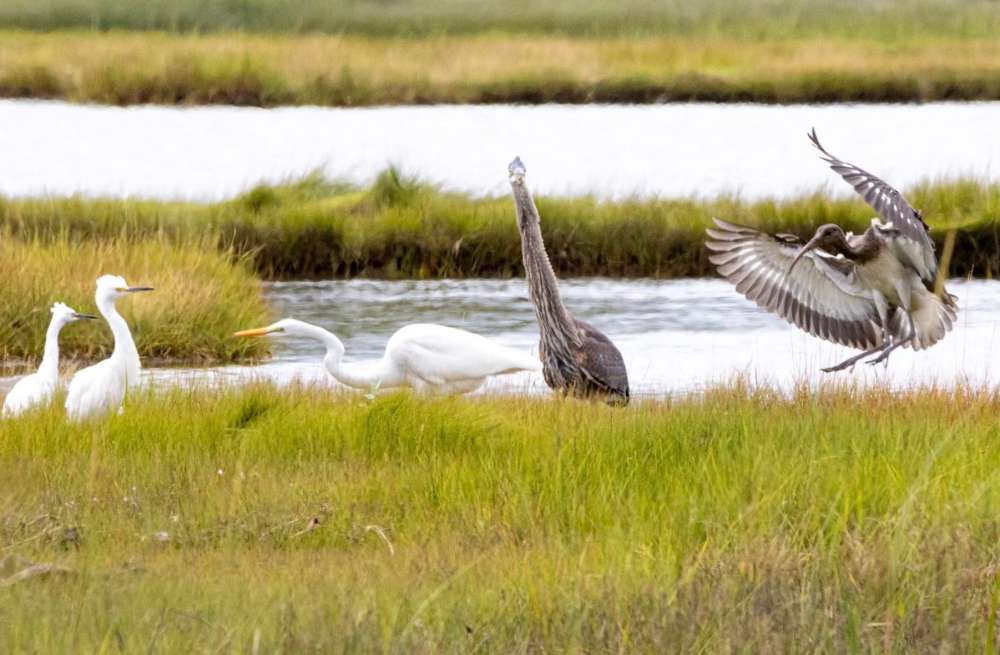 Over the next few hours, snowy egret, great white egret, blue heron, and glossy ibis became her best guesses at their identities. Then just after midnight, Joseph Peter Osterhoudt commented, "That ibis is an immature White Ibis! You should report it to the ME RBA. Great find." (ME RBA is shorthand for Maine Rare Bird Alert.)

Great find, indeed. Maine has only three records of the species, all adults. Two of those sightings happened on Appledore Island (1984, 1993) and the other in Machias (1993), so this wanderer would be a new state bird for almost every observer traveling to Wells.

First thing Thursday, Magill Webber was apparently first on the scene, following a tip from Maine Audubon's staff naturalist, Doug Hitchcox. Before 7am she knew there was more than one white ibis and eventually tallied eight across the salt marsh. That was just the beginning. Birders were flocking to Harbor Road and the ibis count rose all morning.

Doug himself got to see 15 ibises not long after Magill left. He was pretty excited to share his news on Twitter:

Doug also broached the topic on the Maine birds Google Group, an email forum, announcing the mega-rarity to hundreds of potential chasers. In a follow-up email just after noon, Derek Lovitch said "at least 26" were being seen.

I saw the news on maine-birds while eating lunch and promptly drove to Harbor Road. I found three women already tracking the birds. They reported, as others had, that the ibises were keeping to the tall grasses and creek channels, making good sightings a little challenging. Every so often a head popped up or an ibis strode in the clear. I was happy to see two in flight before I left, displaying whitish underwings edged with dark brown and revealing a bright patch of white on their lower backs that hinted at their future snowy plumage.

By the end of the afternoon, at least 36 people had come to ogle the ibises and, for the listers among them, collect another twitch for Maine. It's a new bird for the Wells Reserve, too, the Webhannet estuary being within the boundary.

White ibises are populous and somewhat nomadic, roaming unpredictably. Within the United States, they are generally portrayed as living along the Gulf Coast and Atlantic seaboard up to around North Carolina. But there's some indication of a rapid range expansion under way.

In the past 4 years, observers in New Jersey have gone from excitement at single white ibises to astonishment at hundreds. The species nested in the state for the first time in 2019, breeding continued in 2020, and pairs raised 43 young in 2021. Is the incursion a temporary blip or a sign of a new normal?

What's driving northward movement is open to speculation, as is whether the species will remain "accidental" in Maine after this icebreaker summer. Time will tell.

This is a moment of appreciation, though, as Alexsandra said: "It was really quite a day on the marsh." 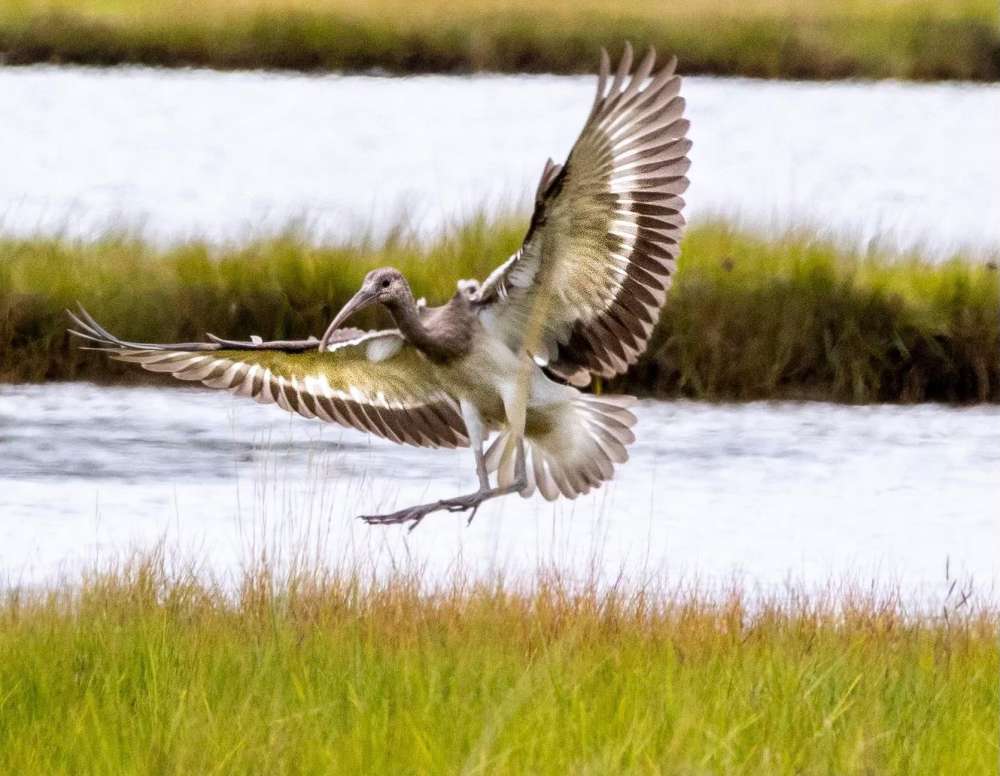 Dovekies, or little auks, are sea-going plankton consumers who tend to stay to our north. You're most likely to spot one from a boat or, with persistence, through a telescope at a good "sea-watching" site. I've never been so lucky; dovekie's on my wish list.

A scissor-tailed flycatcher spends a few hours along the Muskie Trail.