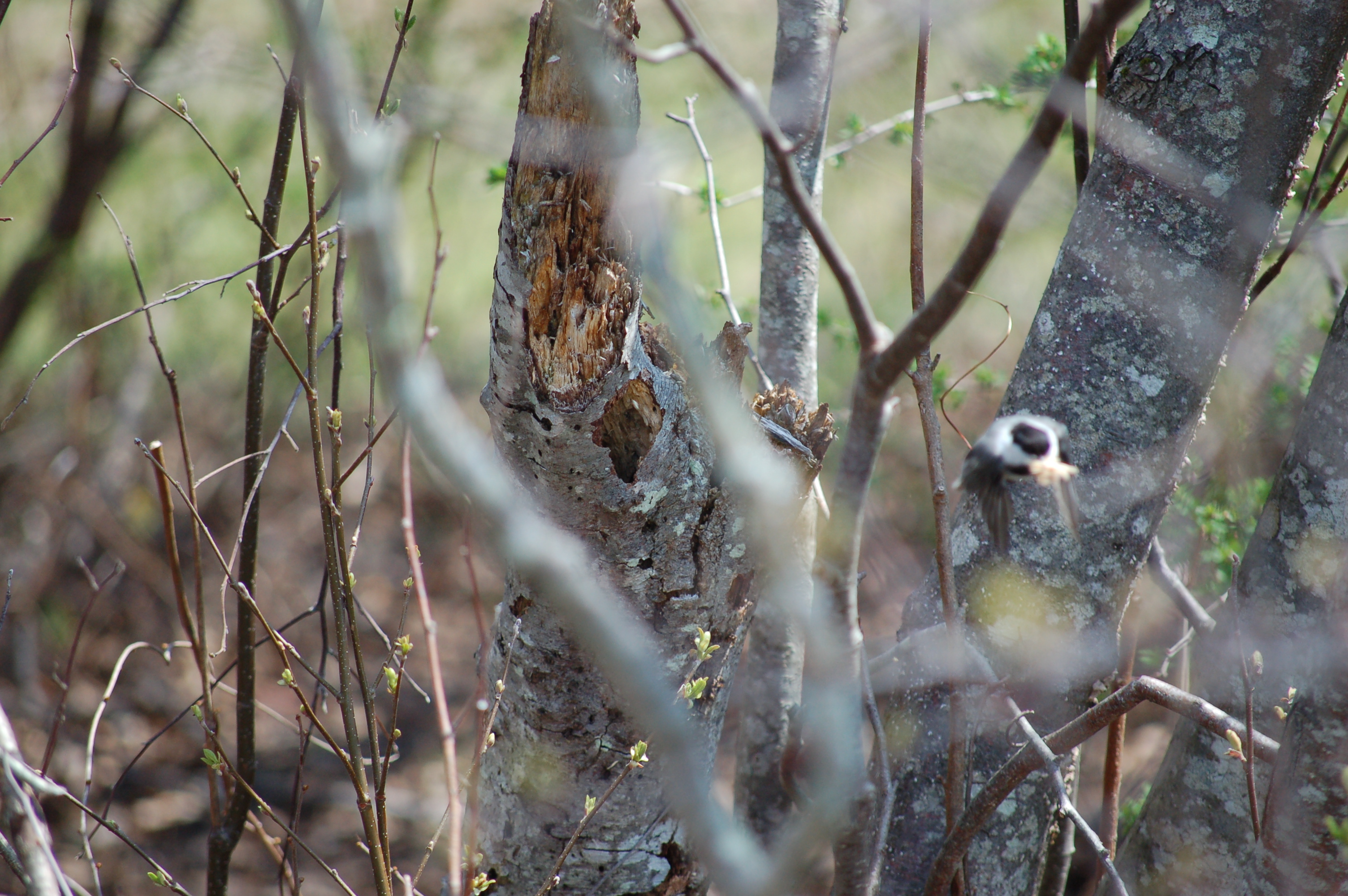 A rotted stump can be the perfect place for black-capped chickadees to nest. A pair of birds will collect "sawdust" from a cavity in the wood, carry it some distance away from the hole, and discard it. Chickadees may work on several potential nest sites at the same time, so the Maine Bird Atlas codes this activity as "probable" breeding, not "confirmed."

The Maine Bird Atlas has begun. This massive project will run through 2022 and, when complete, will represent the most thorough mapping ever done of Maine's avian life.

"We're going to try to create something really amazing for the State of Maine," said Glen Mittelhauser, project coordinator. The project team is counting on a network of volunteers — at all skill levels — to contribute their observations to the record over the next 5 years.

Maine's last bird atlas was finished in 1983. A lot has changed since then. Birdwatching became more mainstream, citizen science bloomed, and the internet took off as the place to share sightings and learn practically anything about birds.

Changes have extended beyond the human dimension, of course. Even casual bird watchers can comment on the waxing and waning of bird populations. Bald eagles are back, bluebirds are no longer unusual, and red-bellied woodpeckers and Carolina wrens have settled into a state they barely visited a few decades ago. But it's not all upticks out there; the outlook is iffy for meadowlarks, wood thrushes, saltmarsh sparrows, and more than a few other species. Repeating the atlas will document all these shifts and set a new baseline.

Knowing Where the Birds Are

Organizers divided each USGS topographic quad map covering the state into six units, resulting in more than 4,000 sampling blocks with each one being almost 9 square miles in size. The Wells Reserve protected area falls within four of these blocks and the boundary of two of them cuts right across the heavily visited (and birded) "Laudholm" site. This block boundary will require a little extra care on the part of birders who wish to contribute data to the atlas. Here's why.

All atlas data is being compiled in eBird, where Wells Reserve observation sites have been well established for many years. Birders have a choice of these existing "hotspots" when they start a new checklist in eBird:

Four of these eBird locations cross from Maine Bird Atlas block Wells_NE into block Wells_CE (see map below). Only the Yankee Woodlot and Coughlin Overlook sites are safely within their respective blocks. For general birding that's not a big deal, but for the atlas that border line matters.

The simplicity of using preexisting eBird hotspots will probably result in some data loss for the atlas, both here at the reserve and throughout the state where block borders are "inconveniently" situated. But as birders tune into the need for precision and accuracy in their reporting, many will establish new "personal locations" that they are confident are within one block or another. 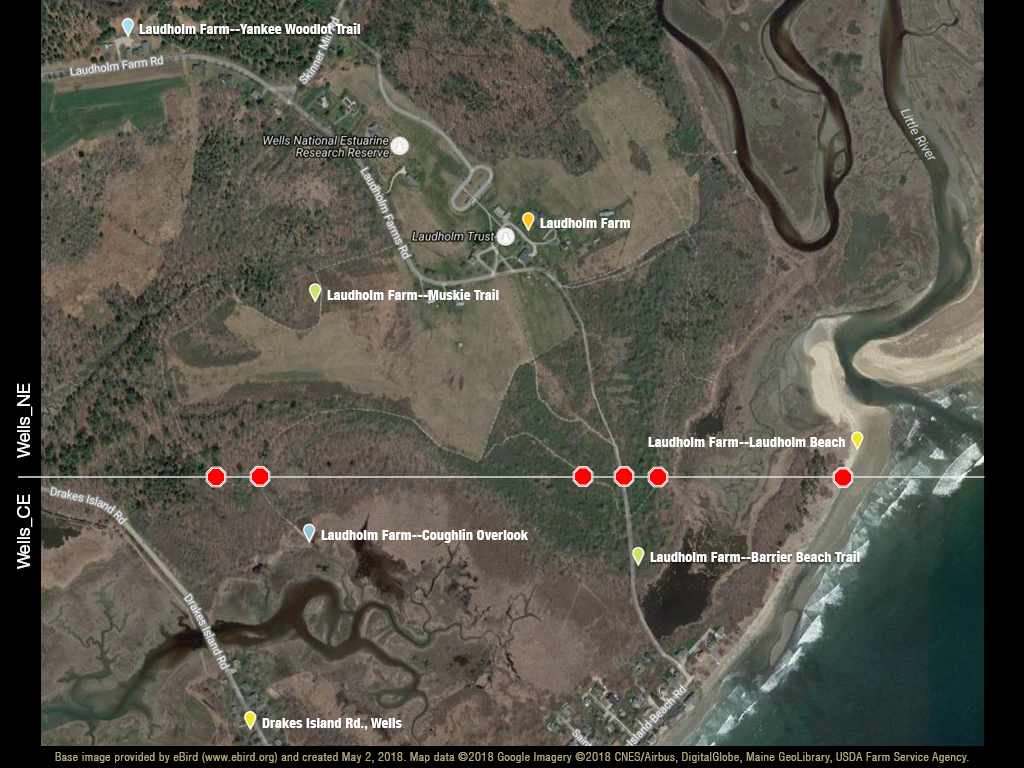 The extended area covered by the Wells Reserve encompasses Wells Harbor, Harbor Road, Drakes Island Road, and half a dozen other eBird "hotspots" down to the Ogunquit River. The Maine Bird Atlas has maps and tools to help atlassers ensure they attribute observations to the correct atlas block.

How to Help with the Maine Bird Atlas

Anyone can be involved in the atlas anywhere in Maine. It's a citizen science project that will occupy hundreds of volunteers over the next 5 years. The Maine Bird Atlas website is packed with resources and tips and instructions for getting involved.

eBird will hold the data and participants are encouraged to open an account there to ease data entry and processing. But paper forms are available and volunteers are ready to transcribe handwritten records into the master database so nobody is excluded.

Coordinator Mittelhauser has useful bywords for anyone intending to contribute:

More About the Atlas

The Maine Bird Atlas is funded and directed by the Maine Department of Inland Fisheries and Wildlife (IF&W), which will use the results to improve its future Wildlife Action Plans. The data will be shared online, too, so its use can be broad, deep, and long-lasting.

This atlas, unlike its predecessor, will account for wintering birds as well as breeding birds. Procedures for the winter component are being developed for the 2018-2019 season.

Piping plovers start four nests on Laudholm Beach in 2017, but only one is successful.

The Year of the Bird, in photos

To celebrate 2018's Year of the Bird, a new slideshow of beautiful and ingenious bird photos by the late Tony King plays in our Visitor Center all summer long

Signs of the Seasons on Citizen Science Day 2019

Taking Care of a Bird in Need