Over the past few years, immature red-tailed hawks have made themselves more comfortable on this repurposed property than they ever could have when Laudholm Farm was raising broilers for market. This spring and summer have been no exception. Visitors have often remarked about a big, bulky bird on the barn, or the farmhouse, or the water tower, or the garden fence, or the circular stone sculpture out in the field. Odds are good they were all seeing the same young predator. It posed for weeks, a solo-raptor photo op.

While the campus has hosted tolerant red-tails for several years, it’s not the same bird coming back year after year. Rather, it seems to be a series of youngsters developing skills and their sense of safe boundaries while feasting on the rodents that sometimes become abundant around these old buildings.

How do we know it’s new birds? An immature red-tail reveals its youth through plumage. The namesake rectrices don’t grow out until after its first birthday, so pale-brown, lightly banded tail feathers signal “hatching year” or “second year” individuals (see below). As summer lengthens, some rust-orange tail feathers may replace the dull ones. For most red-tails, it will be the third year before the effect is complete. Once a red-tail reaches maturity, age is not obvious.

Any port in a storm? No pedestrians spooked the rain-soaked hawk during a downpour on the Laudholm campus. (June 13, 2019)

Too close: Even a tolerant young red-tailed hawk has its boundaries. This one often flew only a short distance to its next perch.

Success: Raptor eyesight is legendary. This hawk flew more than 500 feet in just a few seconds to catch a chipmunk unawares, then carried its prey to a nearby safe perch. Photo: Scott Richardson. (June 18, 2019) 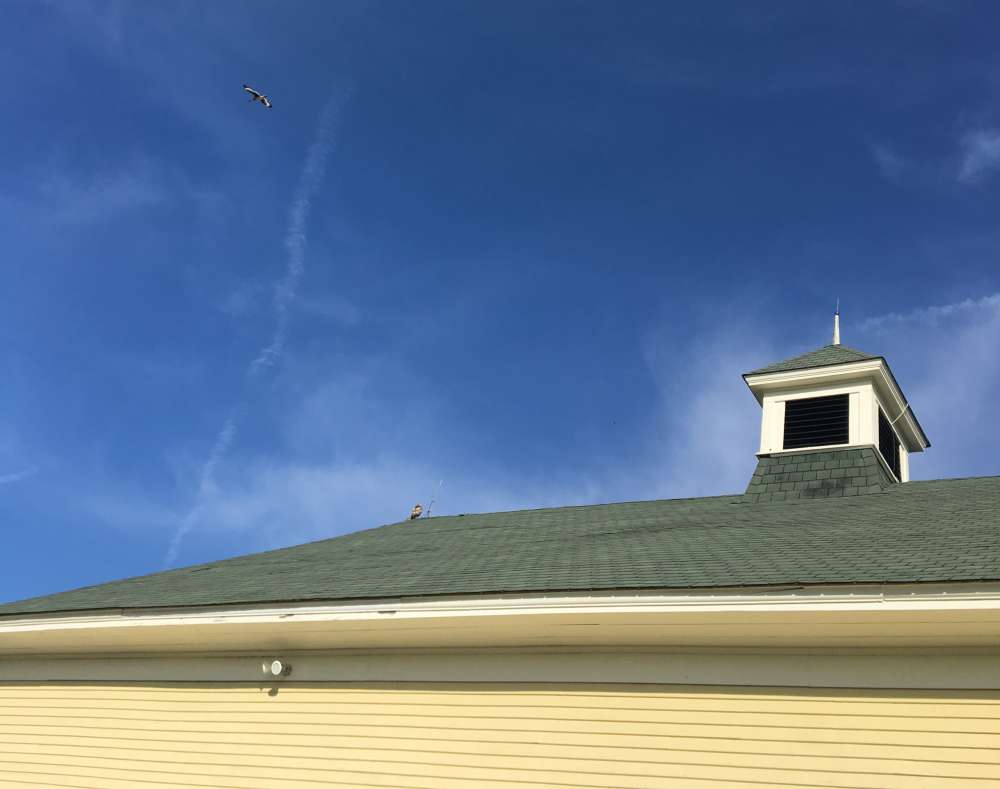 Intolerant willet: For a few days in mid June 2019, a willet would harass our resident red-tail with raucous calling while flying around and over the hawk. The red-tail appeared unfazed. (June 17, 2019) 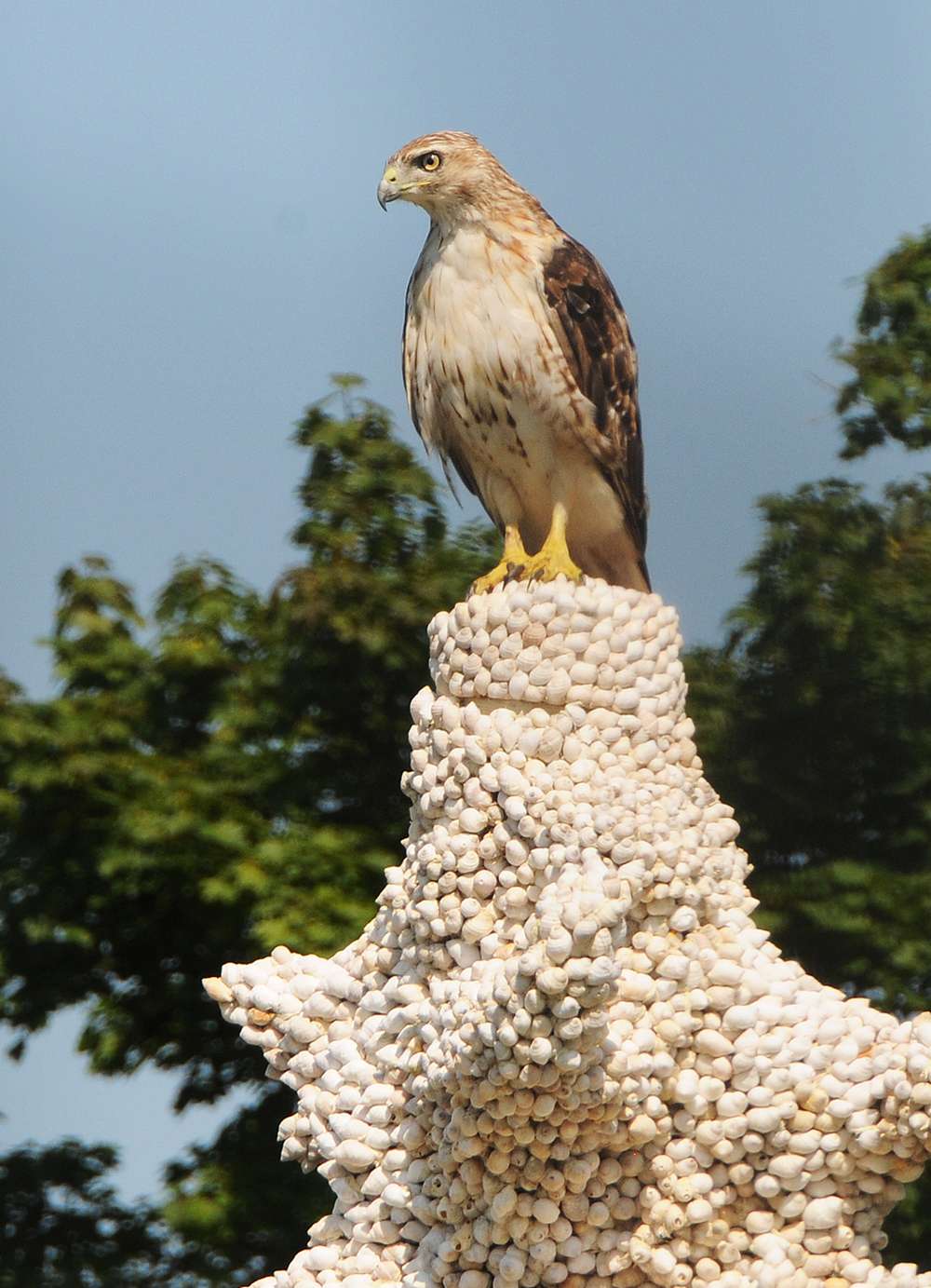 Art lover? An earlier immature red-tailed hawk often perched on a sculpture near the all-seasons garden during our Summer of Art & Science (2017). The bright yellow eye will have become browner with time. Photo: Allan Amioka. 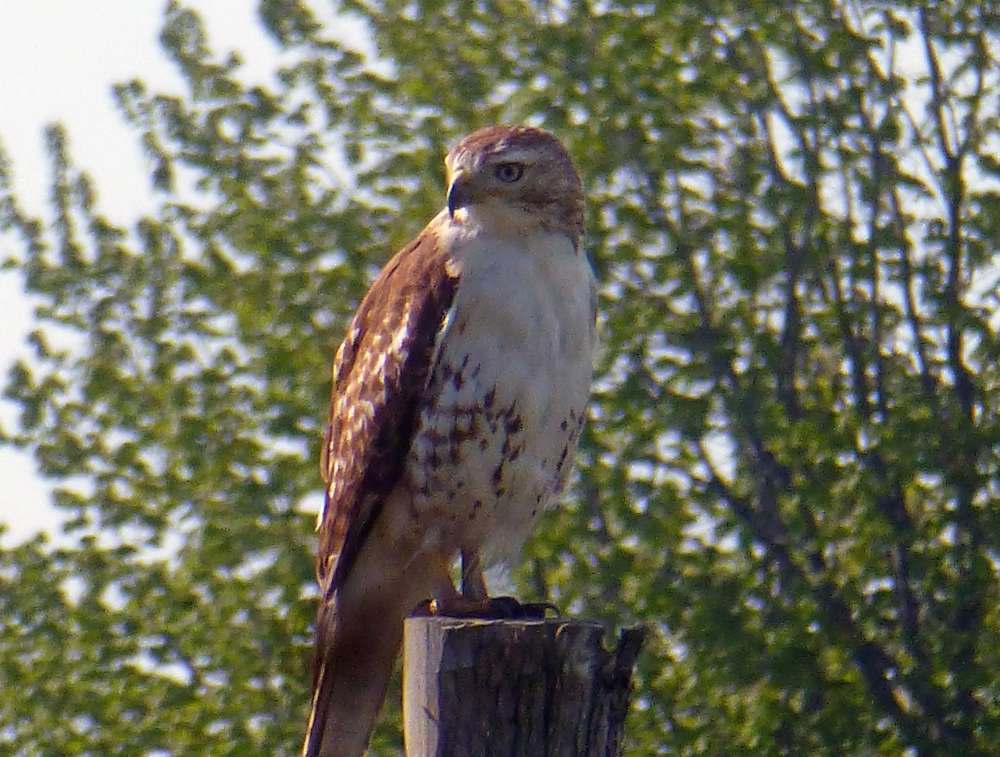 “Hatching Year” references the calendar year during which a baby bird left its egg.

“Second Year” is an individual known to have hatched during the preceding calendar year; the bird has its first birthday during its second calendar year of life.

“Third Year” continues the pattern; a bird hatched in 2017 and banded in 2019 is recorded as a third-year individual.

For some species and plumages, it is not possible to ascertain age precisely. Additional codes include AHY, ASY, and ATY (or “after” the hatch, second, or third year).