When Dr. Jason Goldstein took the reins of the reserve’s research program in 2016, he brought with him an abiding interest in using hobbyist technologies for environmental monitoring. Tested, top-tier instruments are essential in some applications, but Jason is drawn to low-cost, high-capability substitutes when running experiments calling for custom equipment.

Soon after his arrival, for example, Jason co-led a NASA-funded project that engaged inventive students and faculty from St. Joseph’s College and the University of New Hampshire in developing inexpensive monitoring tools based on devices like the Arduino and Raspberry Pi. Among the tinkerers on that project was a doctoral candidate at UNH who crafted—on a tight budget—a nifty gadget for tracking lobster activity.

Last year, Jason invited that colleague, the freshly degreed Dr. Ben Gutzler, to complete a post-doctoral research fellowship at the reserve. They have been collaborating on lobster-centric tech ever since.

The Crustacean Heart and Activity Tracker

The latest iteration of Ben’s lobster tracker incorporates an infrared sensor that can detect a lobster’s heartbeat through its shell. It’s part of a package dubbed the C-HAT (Crustacean Heart and Activity Tracker), which also houses an accelerometer for sensing movement, temperature and light sensors, a microcontroller, a battery, and an SD card for data storage, all in a clear, waterproof container small enough to get strapped to a carapace. 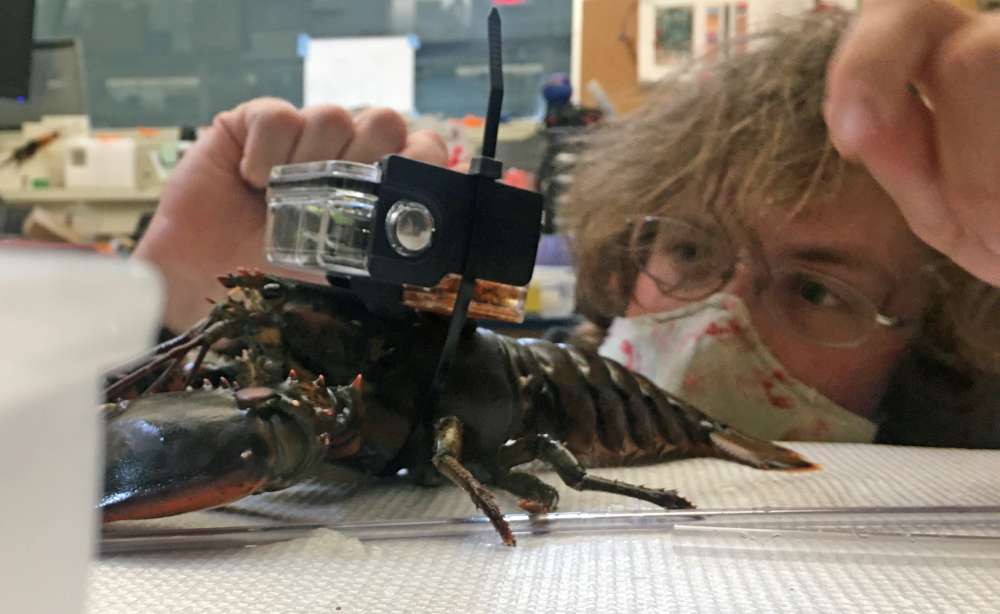 Dr. Ben Gutzler positions a tracker so one of its specialized sensors can pick up the lobster’s heartbeat.

To collect data, a researcher mounts a C-HAT to a lobster when it’s caught and powers it on. The device records the animal’s heart rate and motion multiple times per second as the lobster endures a journey from live tank to storage crate to delivery truck to wholesaler or processor. At the end of the ride, the C-HAT is recovered and its data downloaded.

The C-HAT has become a key tool for a 2-year project, funded by NOAA Fisheries, involving UMaine collaborators and lobster industry partners: Improving Business Practices to Reduce Mortality in the Lobster Supply Chain. Through the project, researchers aim to improve lobster survival by identifying the stress points on the journey “from capture to kitchen” so suppliers can reduce them, thus saving money and preventing waste.

Taking a lobster’s pulse and logging its sways are given context by Ben’s latest invention, the Mocklobster. This sleek contraption is a clear plastic cylinder about 5 inches across and twice as long. Freed from the size constraint imposed by a lobster’s length, the stand-in contains a stack of circuit boards measuring temperature, dissolved oxygen, ambient light, immersion, and movement. A rainbow of wires interconnects them with requisite power, control, and data storage functions. The assembly fits snug inside the waterproof tube with a battery to run it all for 2 weeks.

A Mocklobster joins a C-HAT’d subject on its trek, recording environmental conditions in parallel and with greater detail. The paired sets of timestamped data will give Ben and the team a way to link physiological response to ambient conditions (such as temperature swings or rough handling). By discovering the critical stimuli that cause the most stress to lobsters, they will provide industry partners with good leads for limiting shrink.

View the Spring 2021 issue of Watermark, our member newsletter.

Using ocean drifters (small buoys carrying GPS units) as a stand-in for microscopic lobster larvae will allow scientists to get a better idea of where those larvae drift during their first weeks living as plankton before they settle to the bottom where they grow to adulthood.