Reserve scientists are getting involved in cutting-edge research that could dramatically change the way they survey local streams, rivers, and estuaries for finfish and crustaceans. Modern methods built on genomics could permit our scientists to canvass more sites faster when surveying for biodiversity or species of concern.

Environmental DNA (eDNA) is genetic material in an environmental sample, such as water or sediment. It may contain entire microorganisms (like algae or bacteria) or fragments of tissue, reproductive and waste products, and other cellular material from larger organisms. eDNA methods can identify what species are in a system without requiring field researchers to capture and identify living organisms, which is often a time-consuming process.

Reserve scientists began collecting eDNA during a rainbow smelt study this spring. Project manager Jacob Aman said, “We surveyed fish in the York River using nets while also collecting water samples for DNA testing. We detected smelt DNA even at low concentrations and several weeks after we were no longer catching smelt in our nets.” After this promising start, methods will be refined for continuing the study next spring. 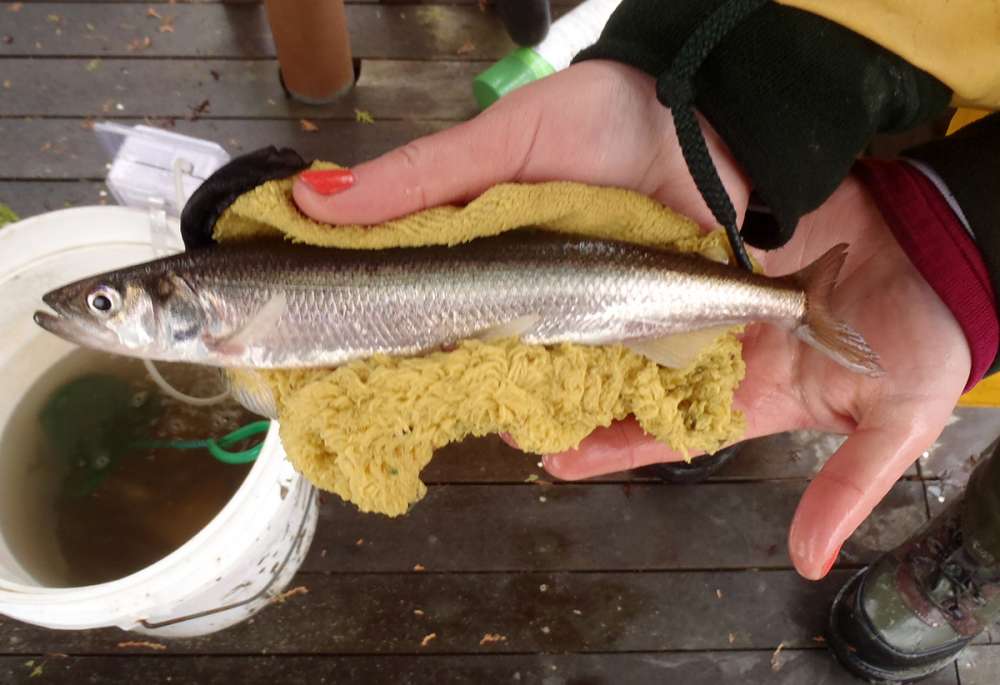 Rainbow smelt in the hand during York River surveys in spring 2017.

The reserve will now be expanding its use of genomic research in fisheries management through a partnership with the University of New Hampshire. UNH was awarded a $496,887 grant for the project “New Technology for Old Problems — Using DNA Methods to Monitor Invasive Species and Biodiversity in Estuarine Systems.”

The Wells Reserve and other research reserves will help UNH design and test a DNA-based method for monitoring invasive species and biodiversity, with a focus on green crab and other crabs on the east and west coasts. “These environmental DNA techniques may revolutionize fisheries field work and population monitoring,” said Research Director Dr. Jason Goldstein.

Genetics and Genomics: What's the Difference?

Genetics is the study of heredity, how characteristics of living organisms are passed from one generation to the next through DNA. Genetics involves the study of specific and limited numbers of genes, or parts of genes, that have a known function.

Genomics is the study of an organism’s complete set of genes. Genomics involves analyzing enormous amounts of DNA-sequence data to find variations. Genomics is a much newer field, made possible through technical advances in DNA sequencing and computational biology.

eDNA methods and traditional plankton-net surveys are complementary ways to investigate estuarine fish assemblages. Which methods to use depend on what question we ask.

When green crabs arrived in New England more than 150 years ago, they found an unoccupied ecological niche in Maine’s salt marshes. Despite their long occupancy, great abundance, and serious impacts, there is a lot left to learn about green crabs. The reserve’s latest research has focused on understanding seasonal movements, population structure, sexual maturity, and effects on habitats.